Carroll County is a United States county located in the southwestern part of the Commonwealth of Virginia. Roughly one fifth of the county lies in the Virginia Piedmont region, while the rest is part of the Appalachian Mountains. The county seat and largest town is Hillsville.

The county was established in 1842 from part of Grayson County, and was officially named in honor of Charles Carroll, a signer of the Declaration of Independence. The borders of Carroll County were later expanded by including land from Patrick County. 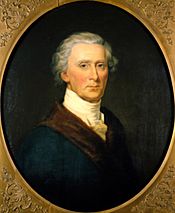 Charles Carroll of Carrollton, for whom the county was named

The first European settlers arrived in the region in the mid 18th century. These were primarily Scotch-Irish pioneers, who were used to high mountain altitudes. However, early settlement was slow, mostly due to the poor agricultural soil of the area. As a result, lead mining was one of the first economic activities in the region.

As the area's population density increased, Carroll County was created in 1842 from part of Grayson County. The new county was officially named for Charles Carroll, a signer of the Declaration of Independence, from Maryland. However, other accounts assert that John Carroll, a Virginia state legislator, had named the county in his own honor, but was blocked by a political rival who had it officially named for Charles Carroll instead.

Parts of Patrick County were added later to increase the size of Carroll County. The first piece was taken in 1845, and another part, which would later become the Fancy Gap District, was added in 1854.

All content from Kiddle encyclopedia articles (including the article images and facts) can be freely used under Attribution-ShareAlike license, unless stated otherwise. Cite this article:
Carroll County, Virginia Facts for Kids. Kiddle Encyclopedia.