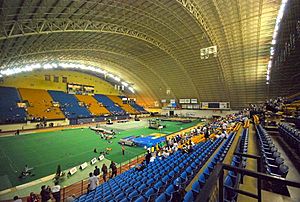 ETSU Memorial Center which is on the campus.

The athletics teams of the university are called the Buccaneers. They have 18 varsity teams, most of which compete in the Southern Conference. The football team, which will resume play in 2015 after a 12-year absence, will play the 2015 season as an independent (not in a conference).

All content from Kiddle encyclopedia articles (including the article images and facts) can be freely used under Attribution-ShareAlike license, unless stated otherwise. Cite this article:
East Tennessee State University Facts for Kids. Kiddle Encyclopedia.