John Sullivan (b. February 17 1740, Somersworth, New Hampshire – d. January 23 1795, Durham, New Hampshire) was an American general in the Revolutionary War and a delegate in the Continental Congress. Sullivan served as a major general in the Continental Army and as Governor (or "President") of New Hampshire. He is most famous for leading the Sullivan Expedition in 1779, a scorched earth campaign against those Iroquois towns that had taken up arms against the American revolutionaries.

Sullivan was the third son of a schoolmaster. He read law with Samuel Livermore of Portsmouth, New Hampshire, and began its practice in 1764 when he moved to Durham. He annoyed many neighbors in his early career, when he was the only lawyer in town, with numerous suits over foreclosures. But by 1772, he was firmly established and began work to improve his relations with the community. In 1773 Alexander Scammel joined John Sullivan's law practice.

He was sent by Durham to the colony's general assembly, and built a friendship with the royal governor John Wentworth. As the American Revolution grew nearer, he began to side more with the radicals. In 1774 the first Provincial (or rebel) Congress sent him as a delegate to the Continental Congress.

In 1775 he was returned to the Congress, but when they appointed him a brigadier general in June, he left to join the army at the siege of Boston.

After the British evacuated Boston in the spring of 1776, Washington sent Brigadier General Sullivan north to replace the fallen John Thomas as commander in Quebec. He took command of the sick and faltering invasion force, sent some of those forces on an unsuccessful counterattack against the British at Trois-Rivières, and withdrew the survivors to Crown Point. This led to the first of several controversies between Congress and General Sullivan, as they sought a scapegoat for the failed invasion of Canada. He was exonerated and promoted to major general on August 9, 1776.

Sullivan rejoined Washington and was placed in command of the troops on Long Island to defend against British General Howe's forces about to envelop New York City. But then, on August 23 Washington split the command between Sullivan and General Israel Putnam. Confusion about the distribution of command contributed to the American defeat at the Battle of Long Island four days later. Sullivan's personal bravery was unquestioned, as he engaged the Hessian attackers with a pistol in each hand. These heroics did not help, and he was captured.

As a prisoner under parole, he carried letters from Admiral Richard Howe to the Congress. When the resulting peace discussions on Staten Island fell apart in September of 1776 some in the Congress, particularly John Adams, found fault with Sullivan.

War with the Main Army

General Sullivan was released in a prisoner exchange in time to rejoin Washington before the Battle of Trenton. There his division secured the important bridge over the Assunpink Creek north of the town. This prevented escape and ensured the high number of Hessian prisoners captured. His route is now a main road in Ewing Township called "Sullivans Way". In January of 1777 Sullivan also performed well in the Battle of Princeton.

In August, he led a failed attempt to retake Staten Island. Again Congress found fault, but he was exonerated by the court of inquiry. This was followed by American losses at Brandywine and Germantown. Congress was frustrated by the continued British occupation of Philadelphia, but since Washington was the only man holding the army together, they made Sullivan the scapegoat. In early 1778 he was transferred to the unimportant post of Rhode Island where he commanded the largely unsuccessful Battle of Rhode Island in August of 1778.

In the summer of 1779, Sullivan led the Sullivan Expedition, a massive campaign against the Iroquois in western New York. During this campaign, troops destroyed a very large Cayuga settlement, called Coreorgonel, on what is now the southwest side of Ithaca, New York.

He pushed his troops so hard that their horses became unusable, and killed them on this campaign, creating the namesake for Horseheads, New York. The lukewarm response of the Congress was more than he could accept. Broke, tired, and again opposed by Congress, he retired from the Army in 1779 and returned to New Hampshire.

At home Sullivan was a hero. New Hampshire returned him as a delegate to the Continental Congress in 1780. But he still had opponents there. In 1781 when he borrowed money from the French minister to Congress, they accused him of being a foreign agent. He resigned from the Congress in August.

Back home again, he was named the state's attorney general in 1782 and served until 1786. During this same time he was elected to the state assembly, and served as speaker of the house. He led the drive in New Hampshire that led to ratification of the United States Constitution on June 21 1788. He was elected President of New Hampshire (now Governor) in 1786, 1787, and in 1789.

When the new federal government was created, Washington named him federal judge for the District Court in New Hampshire in 1789. While his health (and strong drink) prevented his sitting on the bench after 1792, he held the post until he died. His last years were spent in illness and he died January 23 1795, aged 54 at home in Durham and was buried in the family cemetery there. 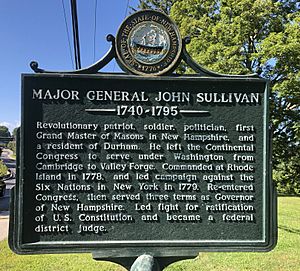 In New Hampshire, both a county and a town are named after him. The General Sullivan Bridge spanning Little Bay near his home town of Durham is named for him. He is featured on a New Hampshire historical marker (number 89) along New Hampshire Route 108 in Durham.

Sullivan County, Missouri, is named for him, as is Sullivan Street in Greenwich Village, Manhattan. Sullivan's Bridge, a bicycle and pedestrian bridge crossing the Schuylkill River at Valley Forge National Historical Park, is named in his honor.

Counties in New York and Tennessee are also named for him, as are towns in New York and Ohio. Sullivan Trail is a road through northeast Pennsylvania that in many areas follows the road made by Sullivan's army in 1779. Part of the march route into Trenton is named Sullivan Way.

All content from Kiddle encyclopedia articles (including the article images and facts) can be freely used under Attribution-ShareAlike license, unless stated otherwise. Cite this article:
John Sullivan (general) Facts for Kids. Kiddle Encyclopedia.