Carter County is a county located in the U.S. state of Tennessee. As of the 2010 census, the population was 57,424. Its county seat is Elizabethton. The county is named in honor of Landon Carter (1760-1800), an early settler active in the "Lost State of Franklin" 1784-1788 secession from the State of North Carolina. 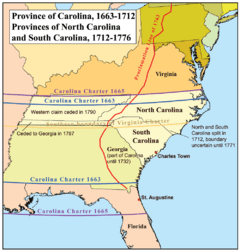 A map of the Province of Carolina

The area was originally claimed by Britain as part of the Clarendon settlements of the Province of Carolina, although actually populated at the time by the Cherokee.

The area was part of (though seldom actually administered by) the following jurisdictions in its early history:

The county is named for General Landon Carter, the son of John Carter of Virginia, who was "chairman of the court" of the first majority-rule system of American democracy, known as the Watauga Association of 1772. The association was the first permanent settlement established outside the original thirteen American colonies and included the area that is today's Carter County. In 1775, the Association was absorbed into North Carolina by petition, becoming known thereafter as the Washington District.

As Wayne County in the State of Franklin

J. G. M. Ramsey records within his 1853 Annals of Tennessee that the State of Franklin established Wayne County from sections of both Washington County and a part of Wilkes County "lying west of the extreme heights of the Apalachian or Alleghany Mountains, into a separate and distinct county by the name of Wayne... This new county covered the same territory now embraced in the limits of Carter and Johnson counties."

Carter County was served by the narrow gauge East Tennessee and Western North Carolina Railroad (The ET&WNC, nicknamed "Tweetsie") until the line ceased operations in 1950.

Carter County is situated entirely within the Blue Ridge Mountains, specifically the Unaka Range and the Iron Mountains. Roan Mountain, which at 6,285 feet (1,916 m) is the highest point in Tennessee outside the Great Smoky Mountains, straddles the county's eastern border with North Carolina. The county's boundary with Sullivan County is defined as the ridgeline of Holston Mountain. 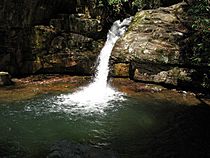 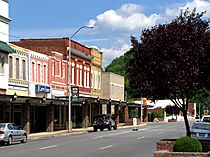 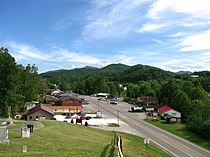 All content from Kiddle encyclopedia articles (including the article images and facts) can be freely used under Attribution-ShareAlike license, unless stated otherwise. Cite this article:
Carter County, Tennessee Facts for Kids. Kiddle Encyclopedia.