In September 1780, the Overmountain Men— a group of American soldiers from the trans-Appalachian frontier who fought during the American Revolution— passed through Roan Mountain en route to North Carolina, where they would engage and defeat a group of British loyalists at the Battle of Kings Mountain. On the night of September 26, this force camped at Shelving Rock, between what is now the Roan Mountain CDP and Roan Mountain State Park, where a rocky outcropping provided a convenient place for the soldiers to store their weapons and gunpowder. The site is now part of the Overmountain Victory National Historic Trail, and the field where the soldiers camped is listed on the National Register of Historic Places.

During the 1870s, John T. Wilder, an industrialist and former Union general, began purchasing large tracts of iron ore-rich lands in the Roan Mountain area, and established several mining operations in the region. In the early 1880s, he established the Roan Mountain community, originally known as Roan Mountain Station, as a stop along the East Tennessee and Western North Carolina Railroad ("Tweetsie"). He laid out streets, planted trees, and built a hotel, the Roan Mountain Inn, as well as a house for his family (the house still stands at the corner of Main and Stratton). In 1885, he established a resort atop the mountain, the Cloudland Hotel, which catered to people seeking relief from hay fever and other seasonal allergies.

Roan Mountain is located in southeastern Carter County, near the Tennessee-North Carolina border. The community is situated along the upper Doe River at the river's confluence with Buck Creek. The mountain with which the community shares its name, Roan Mountain, rises several miles to the south. Reaching an elevation of 6,285 feet (1,916 m), the mountain is the highest point in Tennessee outside the Great Smoky Mountains. The Appalachian Trail traverses the mountain before descending and crossing U.S. Route 19E near the state line east of the CDP, and then turning westward across the crest of White Rocks Mountain, which rises immediately north of the CDP.

There were 484 households out of which 31.6% had children under the age of 18 living with them, 56.0% were married couples living together, 14.0% had a female householder with no husband present, and 27.3% were non-families. 24.8% of all households were made up of individuals and 11.2% had someone living alone who was 65 years of age or older. The average household size was 2.40 and the average family size was 2.86. 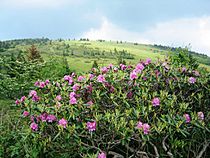 The Roan Mountain Rhododendron Festival is held each summer at the lower elevation of Roan Mountain State Park, offering visitors opportunities to sample traditional foods, purchase locally handmade crafts, and listen to a variety of traditional Southern Appalachian musicians, as well as to view the alpine catawba rhododendron gardens whose blooming season usually peaks during the third or fourth weekend in June.

The Roan Mountain Hilltoppers, a well-known old-time string band performing traditional Appalachian music, hail from the Roan Mountain area. This family band has been featured at venues including the Smithsonian Museum's American Folklife Festival, the 1982 World's Fair in Knoxville, Tennessee, and the Country Music Hall of Fame in Nashville. The band has received numerous awards and recognitions, and acquired an unexpected audience after Malcolm McLaren sampled some of its music in his 1982 hit song, "Buffalo Girls." Later the Hilltoppers' home was visited by the Sex Pistols and Boy George.

Alternate US 19W is co-signed with Interstate 26 for much of its length in Tennessee. US 19E in Tennessee runs concurrently with State Route 37.

Tennessee State Route 143 intersects US-19E in the Roan Mountain community, and connects the area with both the state park and Carvers Gap (near the summit of Roan Mountain).

All content from Kiddle encyclopedia articles (including the article images and facts) can be freely used under Attribution-ShareAlike license, unless stated otherwise. Cite this article:
Roan Mountain, Tennessee Facts for Kids. Kiddle Encyclopedia.