Yancey County is a county located in the U.S. state of North Carolina. As of the 2010 census, the population was 17,818. Its county seat is Burnsville.

This land was inhabited by the Cherokee prior to European settlement, as was much of the Southern Appalachian region.

Independent and sturdy Scottish, English, and Scotch-Irish settlers of the Carolina frontier had crossed the Blue Ridge Mountains and settled the Toe River Valley by the mid-18th century. In the year 1796, one of the early land speculators, John Gray Blount, paid for 326,640 acres (1322 km²) of land, a portion of which later became Yancey County, N.C.

In December 1833, the General Assembly established a new western county, named Yancey, from sections of Burke and Buncombe Counties. Yancey County was named in honor of one of North Carolina's most distinguished statesmen, Bartlett Yancey, of Caswell County. As a U.S. Congressman (1813–1817) and as speaker of the N.C. Senate (1817–1827), he was instrumental in many accomplishments that benefited the state, including the creation of an education fund that was the beginning of the N.C. Public School System. He was an advocate of correcting the inequality in representation in the General Assembly by the creation of new western counties; but he died on August 30, 1828, over five years before the General Assembly created a new county named in his honor. In Yancey's boundaries looms Mount Mitchell, the highest peak in the Eastern U.S., at 6,684 feet (2037 m) above sea level.

On March 6, 1834, "Yellow Jacket" John Bailey conveyed 100 acres (0.4 km²) of land for the county seat. John was given the nickname for his famous temper as told in the books "The Bailey Family of Yancey County,North Carolina" and "Heritage of the Tow River Valley" by Lloyd Richard Bailey, Sr. The town was named Burnsville in honor of Captain Otway Burns, who voted for the creation of the new western county when he was serving in the General Assembly. The grateful people named their county seat for Captain Burns, a naval hero in the War of 1812. A statue of Captain Burns stands on a 40-ton, Mount Airy granite pedestal in the center of the town's public square, which was given the official name of "Bailey Square" by the Yancey County Board of Commissioners on September 1, 1930. The statue of Captain Burns was given to the county on July 5, 1909, by Walter Francis Burns, a grandson of the sea captain. The inscription reads:

Otway Burns - Born in Onslow County, North Carolina, 1777 - Died at Portsmouth, North Carolina, 1850. Sailor - Soldier - Statesman. North Carolina's Foremost Son in the War of 1812-1815 - For Him, This Town Is Named - He Guarded Well Our Seas, Let Our Mountains Honor Him.

As of 2015 the largest self-reported ancestry groups in Yancey County, North Carolina are: 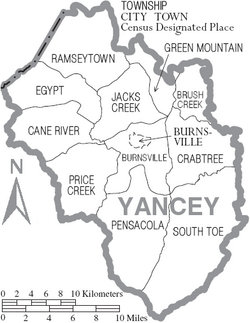 All content from Kiddle encyclopedia articles (including the article images and facts) can be freely used under Attribution-ShareAlike license, unless stated otherwise. Cite this article:
Yancey County, North Carolina Facts for Kids. Kiddle Encyclopedia.