Buncombe County is a county located in the U.S. state of North Carolina. As of the 2010 census, the population was 238,318. Its county seat is Asheville.

The county was formed in 1791 from parts of Burke County and Rutherford County. It was named for Edward Buncombe, a colonel in the American Revolutionary War, who was captured at the Battle of Germantown. The large county originally extended to the Tennessee line. Many of the settlers were Baptists, and in 1807 the pastors of six churches including the revivalist Sion Blythe formed the French Broad Association of Baptist churches in the area.

In 1820, a U.S. Congressman, whose district included Buncombe County, unintentionally contributed a word to the English language. In the Sixteenth Congress, after lengthy debate on the Missouri Compromise, members of the House called for an immediate vote on that important question. Instead, Felix Walker rose to address his colleagues, insisting that his constituents expected him to make a speech "for Buncombe." It was later remarked that Walker's untimely and irrelevant oration was not just for Buncombe—it "was Buncombe." Thus, buncombe, afterwards spelled bunkum and then shortened to bunk, became a term for empty, nonsensical talk. This, in turn, is the etymology of the verb debunk.

The French Broad River enters the county at its border with Henderson County to the south and flows north into Madison County. The source of the Swannanoa River, which joins the French Broad River in Asheville, is in northeast Buncombe County near Mount Mitchell. A milestone was achieved in 2003 when Interstate 26 was extended from Mars Hill (north of Asheville) to Johnson City, Tennessee, completing a 20-year, half-billion dollar construction project through the Blue Ridge Mountains. 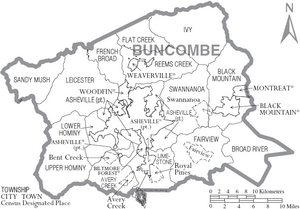 All content from Kiddle encyclopedia articles (including the article images and facts) can be freely used under Attribution-ShareAlike license, unless stated otherwise. Cite this article:
Buncombe County, North Carolina Facts for Kids. Kiddle Encyclopedia.