Haywood County is a county in the western portion of the U.S. state of North Carolina. As of the 2010 census, the population was 59,036. Its county seat and largest city is Waynesville.

The county was formed by European Americans in 1808 from the western part of Buncombe County. It was named for John Haywood, who served as the North Carolina State Treasurer from 1787 to 1827.

In 1828 the western part of Haywood County became Macon County. In 1851 parts of Haywood and Macon counties were combined to form Jackson County.

The last shot of the Civil War east of the Mississippi was fired in Waynesville on May 9, 1865, when elements of the Thomas Legion (Confederate) skirmished with the 2nd NC Mounted (Union). A monument is situated on Sulphur Springs Road in Waynesville.

The Pigeon River originates in Haywood County. It is the only county in North Carolina that all water flows out while none flows in.

Haywood County is situated amidst the Blue Ridge Mountains and contains parts of several major subranges of the Blue Ridge, namely the Great Smoky Mountains in the west and the Plott Balsams and Great Balsam Mountains in the south. Notable peaks in the county include Cold Mountain, at 6,030 feet (1,840 m), Mount Sterling, at 5,835 feet (1,779 m), and Richland Balsam, at 6,410 feet (1,950 m) in elevation. Mt. Guyot, the county's highest point at 6,621 feet (2,018 m), is the 4th highest mountain east of the Mississippi River. Black Balsam Knob, in the Great Balsam Mountains in the southeastern section of the county, is the highest grassy bald in the entire Appalachian range. Haywood County is believed to be the highest county (by mean elevation) east of the Mississippi River, with a mean elevation of 3600 feet (1095m).

A portion of Great Smoky Mountains National Park is in the northwestern section of the county, north of Maggie Valley. Along with several mountains rising to over 6,000 feet (1,800 m) in elevation, the Haywood area of the Smokies includes Cataloochee, which is home to a large campground and several historical structures dating to the 19th and early 20th centuries. Other protected areas include substantial sections of the Pisgah National Forest in the far northeastern and southern parts of the county. 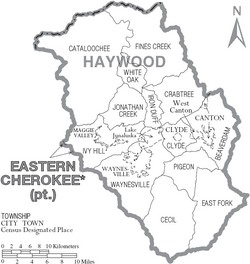 Cold Mountain, in southeast Haywood County within the Pisgah National Forest, became popularly known when featured as the title and setting of the 1997 historical novel Cold Mountain by Charles Frazier. He explored the later stages of the American Civil War in the area and a Confederate soldier's effort to return home. The novel was adapted as a major motion picture, released by Miramax Films in 2003 and starring Nicole Kidman, Jude Law, and Renée Zellweger.

All content from Kiddle encyclopedia articles (including the article images and facts) can be freely used under Attribution-ShareAlike license, unless stated otherwise. Cite this article:
Haywood County, North Carolina Facts for Kids. Kiddle Encyclopedia.