Kids Encyclopedia Facts
Not to be confused with Henderson, North Carolina.

Henderson County is a county located in the U.S. state of North Carolina. As of the 2020 census, the population was 116,281. Its county seat is Hendersonville.

Henderson County is part of the Asheville Metropolitan Statistical Area. 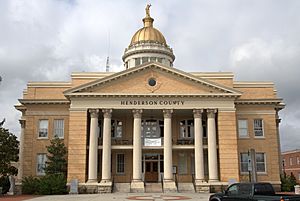 The county was formed in 1838 from the southern part of Buncombe County. It was named for Leonard Henderson, Chief Justice of the North Carolina Supreme Court from 1829 to 1833. There is no evidence Henderson ever passed through the area.

Henderson County, which in 1861 encompassed present-day Transylvania County as well, contributed 1,296 soldiers to the Confederate States Army out of its approximately 10,000 population, as well as 130 Union troops. (Figures from Terrell T. Garren's "Mountain Myth: Unionism in Western North Carolina, published 2006).

Henderson County government was centered around Hendersonville in the 1905 county courthouse on Main Street, until this structure was replaced by the new Courthouse (c. 1995) on Grove Street in Hendersonville.

The first rail line reached Hendersonville in 1879, ushering in a new era of access to the outside world. However, parts of the county had long been known as retreats, including the "Little Charleston" of Flat Rock in which South Carolina's Low Country planter families had maintained second homes since the early 19th century.

A major land boom ensued in the 1920s, culminating in the crash of 1929, which severely deflated prices and left structures such as the Fleetwood Hotel atop Jumpoff Mountain incomplete. Population growth in the county has been rapid since the 1960s as a result of an influx from other states, with many new housing developments changing the face of previously rural areas of the county.

Other notable historic sites in Henderson County include: the Woodfield Inn (1852), Connemara—final home of Carl Sandburg (originally known as Rock Hill, the home of CSA Secretary of the Treasury Christopher Memminger) -- and the St. John in the Wilderness Episcopal Church. Today, Flat Rock is the site of the main campus of Blue Ridge Community College. 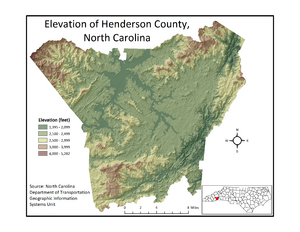 Henderson County's topographic and climatic diversity make it ideal for a great variety of commercial crops and agricultural products. Parts of the county between the Pisgah National Forest on the northwest and the boundary with Polk County on the southeast are often referred to locally as the Crest of the Blue Ridge Agricultural Area in recognition of the region's unique growing conditions. With the exception of tropical fruits and vegetables, local farmers and other agricultural professionals will tell you that almost any commercial crop will grow in Henderson County. At the present time the fruit and berry types being raised include apples, blackberries, blueberries, cantaloupes, cherries, grapes, peaches, plums, raspberries, strawberries and watermelons.

A special word should be said for Henderson County's apple production. Since World War II, apples have been the most important agricultural crop in the county; they require extensive winter chilling, and do not tolerate summer heat and humidity well, so Henderson County, with its cooler climate due to its elevation represents an ideal environment for orchards. Henderson County represents, in fact, the southern limit for large-scale commercial apple production in the eastern United States. The tradition of honoring the local apple industry persists in the county's annual North Carolina Apple Festival, held each year around Labor Day, and culminating in the "King Apple Parade" attended by tens of thousands of spectators.

As of the 2010 census, there were 106,740 people, 45,180 households, and 28,613 families residing in the county. The population density was 275.83 people per square mile (92 km2). There were 42,996 housing units at an average density of 115 per square mile (44 km2). The racial makeup of the county was 94.5% White, 3.3% Black or African American, 0.4% Native American, 0.8% Asian, and .9% from two or more races. 8.7% of the population were Hispanic or Latino of any race. The county has seen a marked increase in its Hispanic population segment and Hispanic culture in recent decades, and has also shared in the higher immigration from the countries of the former USSR experienced by neighboring Buncombe County. The influx of retirees from other U.S. states remains strong.

There were 42,205 households, out of which 25.6% had children under the age of 18 living in them, 54.1% were married couples living together, 9.9% had a female householder with no husband present, and 32.2% were non-families. 28.3% of all households were made up of individuals, and 22% had someone living alone who was 65 years of age or older. The average household size was 2.33 persons and the average family size was 2.78 persons.

Henderson County was historically part of the Cherokee Nation before their removal in the Trail of Tears in 1837–38.

As of 2015, the largest self-reported ancestry groups in Henderson County, North Carolina were: 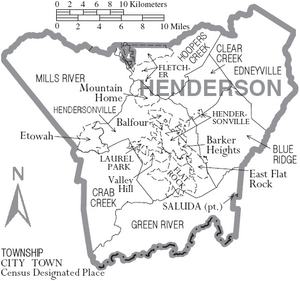 All content from Kiddle encyclopedia articles (including the article images and facts) can be freely used under Attribution-ShareAlike license, unless stated otherwise. Cite this article:
Henderson County, North Carolina Facts for Kids. Kiddle Encyclopedia.