Polk County is a county located in the U.S. state of North Carolina. As of the 2020 census, the population was 19,328. Its county seat is Columbus. The county was formed in 1855 from parts of Henderson and Rutherford counties. It was named for William Polk, a colonel in the American Revolutionary War. The Tryon International Equestrian Center, close to the community of Mill Spring was the location of the 2018 FEI World Equestrian Games. 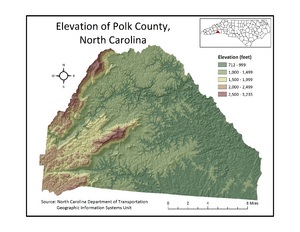 The county's largest body of water is Lake Adger, located about 5 miles (8.0 km) north of Columbus. Lake Adger is a reservoir formed by the damming of the Green River, which flows from west to east across the county. The northern extent of the river's watershed forms the northern border of the county.

The elevation in the county ranges from just under 800 feet (240 m) near the confluence of the Green River and Broad River to over 3,200 feet (980 m) on Tryon Peak and Wildcat Spur, the highest peak in the county. Polk County is divided into two physiographic regions; the Blue Ridge Mountains in the western third of the county and Piedmont for the eastern two-thirds. Since it is in a transition zone between the two regions, Polk County is often referred to as being in the foothills.

The interchange for I-26 and the US 74 freeway is located in Columbus. Interstate 26 provides Polk County with easy access to Asheville and Spartanburg.

Polk County is also served by an additional non-freeway U.S. Highway: US 176. This was the primary highway linking Saluda and Tryon to Hendersonville and Spartanburg, S.C. prior to the delayed completion of I-26 in 1976. Two North Carolina routes, NC 108 and NC 9, traverse the county as well. NC 108 begins in Rutherfordton and travels west through Columbus and ends at US 176 in Tryon. Oriented north-to-south, NC 9 connects Black Mountain and Lake Lure to Spartanburg and points southeast via Polk County. NC 108 and NC 9 intersect at the unincorporated town of Mill Spring.

Polk County and Saluda are infamous among railroad enthusiasts for the Saluda Grade, the steepest standard-gauge mainline railway grade in the United States. Norfolk Southern suspended freight traffic indefinitely along this route in December 2001. The track remains in place, but are cut near Flat Rock, North Carolina and Landrum, South Carolina. 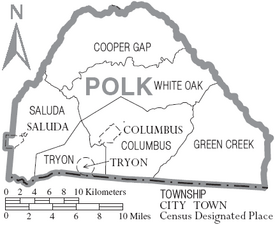 All content from Kiddle encyclopedia articles (including the article images and facts) can be freely used under Attribution-ShareAlike license, unless stated otherwise. Cite this article:
Polk County, North Carolina Facts for Kids. Kiddle Encyclopedia.