Rutherford County is a county in the southwestern area of the U.S. state of North Carolina. As of the 2020 census, the population was 64,444. Its county seat is Rutherfordton.

The county was formed in 1779 from the western part of the former Tryon County. It was named for Griffith Rutherford, leader of an expedition against the Cherokee in 1776 and a general in the American Revolutionary War. 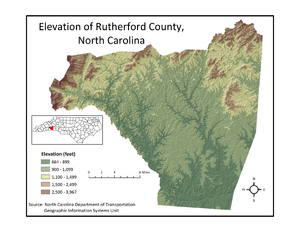 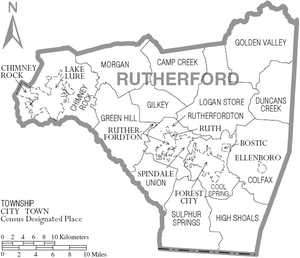 In 2010, Rutherford County was selected as the location for a new $450 million data center for Facebook.

Horsehead Corporation announced the construction of its new, state-of-the-art zinc and diversified metals production facility in Rutherford County, NC, near the municipality of Forest City.

Camp Bud Scheile A Boy Scout camp run by the Piedmont Council BSA is located North of Forest City. It can accommodate as many as 1800 campers every summer.

All content from Kiddle encyclopedia articles (including the article images and facts) can be freely used under Attribution-ShareAlike license, unless stated otherwise. Cite this article:
Rutherford County, North Carolina Facts for Kids. Kiddle Encyclopedia.