Burke County is a county located in the U.S. state of North Carolina. As of the 2010 census, the population was 90,912. Its county seat is Morganton. Burke County is part of the Hickory–Lenoir–Morganton, NC Metropolitan Statistical Area.

Indigenous peoples inhabited the interior as well as the coastal areas for thousands of years. Native Americans of the Mississippian culture inhabited the county long before Europeans arrived in the New World. The largest Mound Builder settlement was at Joara, a 12-acre (49,000 m2) site and regional chiefdom near present-day Morganton. It was the center of the largest Native American settlement in North Carolina, dating from about 1000 AD and expanding into the next centuries.

In 1567, a Spanish expedition arrived and built Fort San Juan, claiming the area for the colony of Spanish Florida. They had been sent by the governor at Santa Elena (Parris Island) in South Carolina. Captain Juan Pardo, leader of the expedition, left about 30 soldiers at the fort while continuing his exploration. In the spring of 1568 the Indians attacked the fort, killing the soldiers and burning the fort. Indians killed the garrisons at five other Spanish forts in the interior. Introduction of European diseases caused high fatalities among the Mississippians, and takeover of survivors by larger tribes led to Native American abandonment of the area. Two hundred years passed before the next Europeans: English, Scots-Irish and German colonists, attempted to settle here again.

In 1777, Burke County was formed from Rowan County. It was named for Thomas Burke, then serving as a delegate to the Continental Congress (1777 to 1781). He was later elected as Governor of North Carolina, serving from 1781 to 1782. The western Piedmont was settled by many Scots-Irish and German immigrants in the mid-to-late 18th century. They were generally yeoman farmers and fiercely independent. Most Burke families were not slaveholders; however, some researchers have reported that, by 1833, 5000 slaves were mining gold in Burke County (Speculation Lands Collection of the University of NC at Asheville). The 1860 U.S. Census found 9237 persons living in Burke County, which included 2471 slaves and 276 free persons of color. During the 1920's, five Rosenwald schools were built, making Burke a full participant in the historic movement that benefited so many African-American families and communities across the South.

Burke County citizens participated in the Battle of Kings Mountain, which pitted Appalachian frontiersmen against the Loyalist forces of the British commander Ferguson at Kings Mountain, SC in the American Revolution. Rather than waiting for Ferguson to invade their territory, militiamen throughout the Blue Ridge crossed over the mountains and thus were called the "Over Mountain Men". (Clark, "Burke County," pp. 37–39) 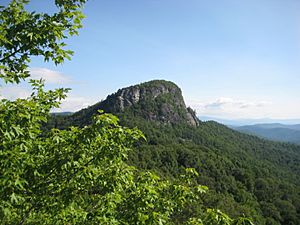 Table Rock, a prominent peak in the county in the east rim of Linville Gorge, part of Pisgah National Forest, has been described as "the most visible symbol in the region". 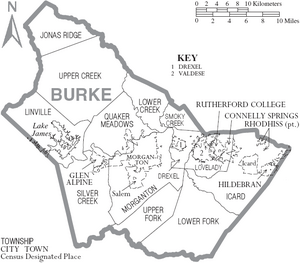 Many scenes from the 1992 film Last of the Mohicans were filmed in Burke County. A full-scale fort was built next to the Linville boat access on Lake James for the filming. The fort was later destroyed and the land replanted with trees. Many of the extras who played settlers, British soldiers, and Native Americans were locals from Burke and surrounding counties.

The final scene from The Hunt for Red October had the backdrop filmed on Lake James, while the actors stayed in Hollywood

In 2011, scenes for the Lionsgate adaptation of The Hunger Games were filmed near Hildebran, North Carolina at the Henry River Mill Village.

All content from Kiddle encyclopedia articles (including the article images and facts) can be freely used under Attribution-ShareAlike license, unless stated otherwise. Cite this article:
Burke County, North Carolina Facts for Kids. Kiddle Encyclopedia.