Catawba County is a county located in the U.S. state of North Carolina. As of the 2010 census, the population was 154,810. Its county seat is Newton, and its largest city is Hickory. The county is part of the Hickory–Lenoir–Morganton, NC Metropolitan Statistical Area.

The county was formed in 1842 from Lincoln County. It was named for the Catawba tribe of Native Americans, who once inhabited the area. German Lutheran farmers settled the area in the 1700s.

With approximately twenty freight trains a day, Catawba County is a freight railroad transportation center. This is largely due to the areas strong manufacturing based economy, and its placement along the Norfolk Southern Railway line. The Caldwell County Railroad also serves the county and interchanges with Norfolk Southern in Hickory.

Conover has been designated as the Catawba County passenger rail stop for the Western North Carolina Railroad planned to run from Salisbury, NC, to Asheville. 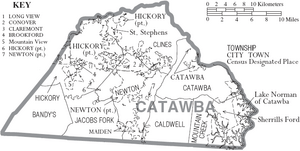 Catawba County is part of the "North Carolina Data Center Corridor" in western North Carolina. The town of Maiden is home to the Apple iCloud data center and is the largest privately owned solar farm in the United States (operated by Apple). As of 2017, the Catawba County Economic Development Corporation controls a 55-acre business park in Conover designed for data centers and office use. CommScope, Inc., and Corning Corp., manufacturers of fiber optic cabling, became the region’s largest employers in the late 1990s. The city of Hickory is home to Lenoir–Rhyne University, the Hickory Motor Speedway, and the minor league baseball team the Hickory Crawdads. The town of Conover is home to the Greater Hickory Classic at Rock Barn.

All content from Kiddle encyclopedia articles (including the article images and facts) can be freely used under Attribution-ShareAlike license, unless stated otherwise. Cite this article:
Catawba County, North Carolina Facts for Kids. Kiddle Encyclopedia.