Newton is a city in Catawba County, North Carolina, United States. As of the 2010 census, the city had a population of 12,968. It is the county seat of Catawba County. 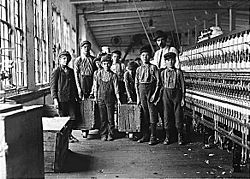 Some of the bobbin doffers and the superintendent at Catawba Cotton Mill, December 1908. Photographed by Lewis Hine.

Listings on the National Register of Historic Places for places in Catawba County:

All content from Kiddle encyclopedia articles (including the article images and facts) can be freely used under Attribution-ShareAlike license, unless stated otherwise. Cite this article:
Newton, North Carolina Facts for Kids. Kiddle Encyclopedia.