Lake Norman is the largest man-made body of fresh water in North Carolina. It was created between 1959 and 1964 as part of the construction of the Cowans Ford Dam by Duke Energy.

Lake Norman is fed by the Catawba River, and drains into Mountain Island Lake to the south. It was named after former Duke Power president Norman Atwater Cocke. Lake Norman is sometimes referred to as the "inland sea" of North Carolina; it offers 520 miles (840 km) of shoreline and a surface area of more than 50 square miles (130 km2). Full pond at Lake Norman is 760 feet (230 m) above mean sea level. Interstate 77 and North Carolina Highway 150 cross Lake Norman at different points. Lake Norman ranks as the largest man-made lake in the state of North Carolina and was created in 1963. Lake Norman offers numerous attractions to explore. From Lake Norman, one can easily of travel anywhere in the state within a few hours' time. It is just north of Charlotte, and the mountains and coast are only a short drive away.

Lake Norman provides electricity to the Piedmont region of the Carolinas. It powers the generators at the hydroelectric station at Cowans Ford Dam, and is used by Marshall Steam Station and McGuire Nuclear Station to cool the reactors whilst generating the steam that drives their turbines. The lake supplies water to Lincoln County, Catawba County, Iredell County, Mooresville, Charlotte, and other towns in Mecklenburg County, particularly Cornelius, Davidson and Huntersville. 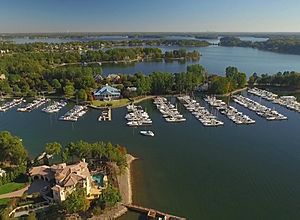 Davidson College owns and operates a "Lake Campus" for students at Lake Norman.

All content from Kiddle encyclopedia articles (including the article images and facts) can be freely used under Attribution-ShareAlike license, unless stated otherwise. Cite this article:
Lake Norman Facts for Kids. Kiddle Encyclopedia.