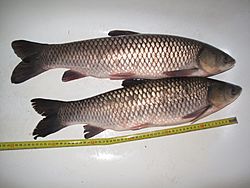 The grass carp (Ctenopharyngodon idella) is a large, herbivorous, freshwater fish species of the family Cyprinidae native to eastern Asia, with an original range from northern Vietnam to the Amur River on the Siberia-China border. This Asian carp is the only species of the genus Ctenopharyngodon.

It is cultivated in China for food, but was introduced in Europe and the United States for aquatic weed control, becoming the species of fish with the largest reported production in aquaculture globally, over five million tonnes per year.

The grass carp is a fish of large, turbid rivers and associated floodplain lakes, with a wide degree of temperature tolerance. Grass carp enter reproductive condition and spawn at temperatures of 20 to 30 °C (68 to 86 °F).

The grass carp grows very rapidly. Young fish stocked in the spring at 20 cm (7.9 in) will reach over 45 cm (18 in) by fall. The typical length is about 60–100 cm (23.5–39.5 in). The maximum length is 2.0 m (6.6 ft) and they grow to 45 kg (99 lb). According to one study, they live 5-9 years, with the oldest surviving 11 years. In Silver Lake, Washington, a thriving population of grass carp is passing the 15-year mark. They eat up to three times their own body weight daily. They thrive in small lakes and backwaters that provide an abundant supply of freshwater vegetation.

This species occurs in lakes, ponds, pools, and backwaters of large rivers, preferring large, slow-flowing or standing water bodies with vegetation. In the wild, grass carp spawn in fast-moving rivers, and their eggs, which are slightly heavier than water, develop while drifting downstream, kept in suspension by turbulence. The eggs are thought to die if they sink to the bottom.

Adults of the species feed primarily on aquatic plants. They feed on higher aquatic plants and submerged terrestrial vegetation, but may also take detritus, insects, and other invertebrates.

Grass carp have been introduced to many countries around the world. In the Northern Hemisphere, countries and territories of introduction include Taiwan, Iran, Israel, Japan, the Philippines, Pakistan, the United States, Mexico, India, Malaysia, the Netherlands, Switzerland, Czech Republic, Slovakia, Croatia, Serbia, Slovenia, Montenegro, Bosnia and Herzegovina, Macedonia, Denmark, Sweden, Romania, Poland, Italy, Germany, France, and the United Kingdom. In the Southern Hemisphere, they have been introduced to Argentina, Venezuela, Fiji, New Zealand, Australia, and South Africa. Grass carp are known to have spawned and established self-reproducing populations in only six of the many larger Northern Hemisphere rivers into which they have been stocked. Their failure to establish populations in other rivers suggests they have quite specific reproductive requirements.

In the United States, the species was first imported in 1963 from Taiwan and Malaysia to aquaculture facilities in Alabama and Arkansas. The first release is believed to have been an accidental escape in 1966 from the U.S. Fish and Wildlife Service's Fish Farming Experimental Station in Stuttgart, Arkansas, followed by planned introductions beginning in 1969. Subsequently, authorized, illegal, and accidental introductions have been widespread; by the 1970s, the species had been introduced to 40 states, and it has since been reported in 45 of the country's 50 states. In 2013, it was determined to be reproducing in the Great Lakes Basin. It is still stocked in many states as an effective biocontrol for undesirable aquatic vegetation, many species of which are themselves introduced.

Grass carp require long rivers for the survival of the eggs and very young fish.

Use as weed control 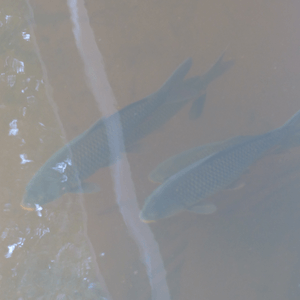 Healthy, live grass carp as seen from above

Grass carp were introduced into New Zealand in 1966 to control the growth of aquatic plants. Unlike the other introduced fish brought to New Zealand, the potential value and impact of grass carp was investigated in secure facilities prior to their use in field trials. They are now approved by the New Zealand government for aquatic weed control, although each instance requires specific authorization. In the Netherlands, the species was also introduced in 1973 to control over-abundant aquatic weeds. The release was controlled and regulated by the Dutch Ministry of Agriculture, Nature, and Food Quality. In both of these countries, control is made easier because grass carp are very unlikely to naturally reproduce because of their very specific breeding requirements, but elsewhere, control is obtained by the use of sterile, triploid fish. 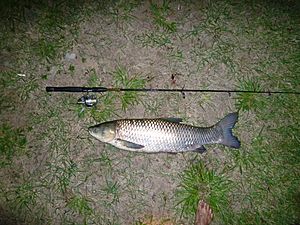 Grass carp grow large and are strong fighters on a rod and reel, but because of their vegetarian habits and their wariness, they can be difficult to catch. The IGFA World record for a grass carp caught on line and hook is 39.75 kg, (87.6 lb) caught in Bulgaria in 2009.

Where grass carp populations are maintained through stocking as a biocontrol for noxious weeds, fishers are typically asked to return any caught to the water alive and unharmed.

The fish are popular in areas where bowfishing for them is legal.

All content from Kiddle encyclopedia articles (including the article images and facts) can be freely used under Attribution-ShareAlike license, unless stated otherwise. Cite this article:
Grass carp Facts for Kids. Kiddle Encyclopedia.