Stuttgart is a city in and the county seat of the northern district of Arkansas County, Arkansas, United States. It is located on U.S. Route 165, approximately 45 miles (72 km) southeast of Little Rock; and on U.S. Route 79 approximately 110 miles southwest of Memphis, Tennessee. Stuttgart is also on the Union Pacific Railroad between Memphis, Tennessee, and Pine Bluff, Arkansas. As of the 2010 census it had a population of 9,326.

Stuttgart was founded by Reverend Adam Bürkle, a native of Plattenhardt in Germany. He moved to the United States in 1852 and founded a settlement at Gum Pond after living in Ohio. In 1880, he opened a post office and had thus to name the village. In honor of his home he named it after Stuttgart, then capital of the Kingdom of Württemberg. In 1882, the Texas and St. Louis railroad was opened. Stuttgart became a city in 1884, and in 1904, rice farming was first introduced in the Stuttgart area. Stuttgart's first Post Office General was a Black man named Martin Toms according to the US Census.

According to the United States Census Bureau, the city has a total area of 7.2 square miles (18.7 km2), all land. Hard clay underlying the area's topsoil makes Stuttgart a good place to grow rice, which grows best in flooded fields made possible by the clay. The geography is mainly flat with no outstanding mountainous features with the exception of "WBA Mountain", a small artificial mound located west of the city.

The climate in this area is characterized by hot, humid summers and generally mild to cool winters. According to the Köppen Climate Classification system, Stuttgart has a humid subtropical climate, abbreviated "Cfa" on climate maps. 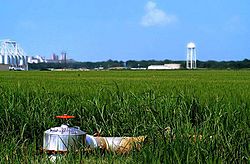 The 1989 movie Rosalie Goes Shopping, directed by Percy Adlon and starring Marianne Sägebrecht, was set in Stuttgart. The city drew media attention during the sixth cycle of America's Next Top Model in the spring of 2006 when Stuttgart resident Furonda Brasfield was featured among the contestants. 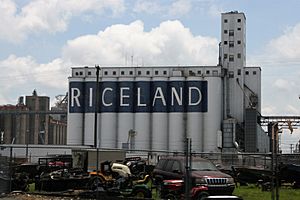 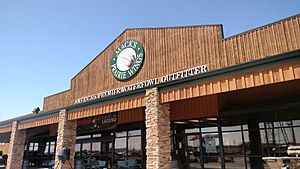 Stuttgart is home to Mack's Prairie Wings, known around the world as the premier waterfowl sports outfitter, through their store and online presence. During the third week in November (Thanksgiving Week), Stuttgart holds the World Championship Duck Calling Contest that brings in people of all ages from around the world to show off their talent using a duck call.

Riceland Foods, a farmer-owned agricultural marketing cooperative and world's largest miller and marketer of rice, is headquartered in Stuttgart.

Producers Rice Mill, another farmer-owned agricultural marketing cooperative that is also among the largest millers and marketers of rice is also headquartered in Stuttgart.

Stratton Seed - Stuttgart is home to Stratton Seed, a large marketer of soybeans and soybean seed.

Baptist Hospital - Stuttgart also has a branch of the Baptist Hospital Group which serves a large part of Arkansas. The Stuttgart Baptist Hospital is a central hospital for much of the surrounding region - - Arkansas County, Prairie County, Monroe County, Western Phillips, Northern Jefferson County, and Eastern Lonoke County. It is one of the largest employers in Stuttgart.

The University of Arkansas' Dale Bumpers Rice Research Center, about seven miles east of Stuttgart, employs a team of scientific researchers who breed new varieties of rice, and is one of the biggest employers in the area.

Delta Plastics of the South is a manufacturer of plastic irrigation tubes used for watering crops. These tubes are a replacement for more rigid plastic or aluminum pipe systems that used to be used to irrigate. One of Delta Plastics' manufacturing plants is located in Stuttgart, and is a big employer in the area.

Public education for elementary and secondary school students is primarily provided by Stuttgart Public Schools, which leads to graduation from Stuttgart High School.

Stuttgart also has a branch of Phillips County Community College, a two-year junior college (that also has campuses in Helena and DeWitt), which is affiliated with the University of Arkansas system.

All content from Kiddle encyclopedia articles (including the article images and facts) can be freely used under Attribution-ShareAlike license, unless stated otherwise. Cite this article:
Stuttgart, Arkansas Facts for Kids. Kiddle Encyclopedia.