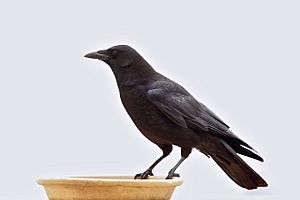 The American crow (Corvus brachyrhynchos) is a species of crow that is found in North America. It is of least concern, this means that it is not in any danger and is safe. A large group of crows is also called a murder. These crows can also be tamed to be around humans.

These crows also carry different viruses that might be harmful to humans if the crow is infected with the disease.

All content from Kiddle encyclopedia articles (including the article images and facts) can be freely used under Attribution-ShareAlike license, unless stated otherwise. Cite this article:
American crow Facts for Kids. Kiddle Encyclopedia.