Caldwell County is a county in the U.S. state of North Carolina. It is located in the foothills of the Blue Ridge Mountains. As of the 2020 census, the population was 80,652. Its county seat is Lenoir. Caldwell County is part of the Hickory–Lenoir–Morganton, NC Metropolitan Statistical Area. 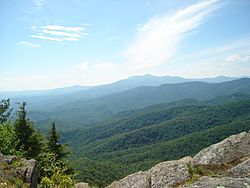 Caldwell County is divided into three distinct geographic sections: the Blue Ridge Mountains, which dominate the northern and western parts of the county; the gently rolling Piedmont country in the middle and southern parts of the county; and the Brushy Mountains, an isolated remnant of the Blue Ridge Mountains. The "Brushies", as they are often called, run across much of Caldwell County's eastern section. Hibriten Mountain, located within the city limits of Lenoir, the county's largest city, marks the western end of the Brushy Mountain range. In the western part of the county is the Wilson Creek area.

US 321 is the busiest highway in the county with an annual average daily traffic count of 39,000.

Other major highways include:

The Blue Ridge Parkway also crosses the northern tip of the county. 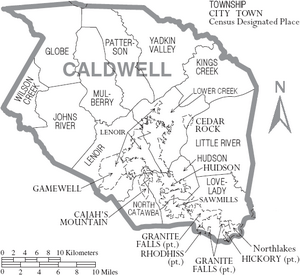 All content from Kiddle encyclopedia articles (including the article images and facts) can be freely used under Attribution-ShareAlike license, unless stated otherwise. Cite this article:
Caldwell County, North Carolina Facts for Kids. Kiddle Encyclopedia.