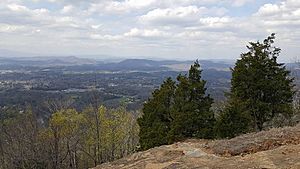 Hibriten Mountain, located just east of Lenoir, North Carolina, marks the western end of the Brushy Mountains range. At 2,211 feet, the mountain's summit is nearly 1,000 feet above the surrounding terrain. The summit is well known to the locals for its large welcome light which glows at night in the shape of a star in the weeks before Christmas and a cross before Easter.

A fire tower was erected at the summit in 1927. It is considered one of the most important fire towers in western North Carolina.

Its geographic and symbolic importance to the area was demonstrated when, in 1966, a new high school was opened at the base of the peak. It was named Hibriten High School in honor of the mountain.

A hang gliding ramp was built at the west end of the mountain top in 1982 by The Buzzard Club.

Hibriten Mountain not only provides a hang gliding location but also a great hiking trail for the community. There is even an annual race called the Hibriten Hill Run for Children which features a 5k and 10k run.

All content from Kiddle encyclopedia articles (including the article images and facts) can be freely used under Attribution-ShareAlike license, unless stated otherwise. Cite this article:
Hibriten Mountain Facts for Kids. Kiddle Encyclopedia.