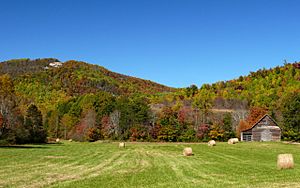 Autumn in the Brushy Mountains. The peak on the left is Bald Rock Mountain.

The Brushy Mountains are a mountain range located in northwestern North Carolina. They are an isolated "spur" of the much larger Blue Ridge Mountains, separated from them by the Yadkin River valley. A deeply eroded range, they move from the southwest to the northeast, and cross five counties in North Carolina: Caldwell, Alexander, Wilkes, Iredell, and Yadkin.

The Brushy Mountains divide, for much of their courses, the waters of the Yadkin River and the Catawba River, two of central North Carolina's largest rivers. The range is approximately 45 miles (72 km) long, but only 4 to 8 miles wide. The highest point in the chain is Pores Knob (2,680 feet, 817 meters), in Wilkes County. Among the other notable peaks in the range are Hibriten Mountain in Caldwell County, which marks the western end of the Brushy Mountains and is a prominent landmark in the city of Lenoir, North Carolina; Hickory Knob, the highest point in Alexander County, North Carolina; and Fox Mountain, the highest point in Iredell County, North Carolina. The "Brushies", as they are often called by locals, usually rise from 300 to 800 feet (240 m) above the surrounding countryside, with few peaks rising more than a thousand feet above their base. The forests on the mountains are part of the Southeastern mixed forests ecoregion.

All content from Kiddle encyclopedia articles (including the article images and facts) can be freely used under Attribution-ShareAlike license, unless stated otherwise. Cite this article:
Brushy Mountains (North Carolina) Facts for Kids. Kiddle Encyclopedia.