The county was formed in 1777 from parts of Surry County and Washington District (now Washington County, Tennessee). The first session of the county court was held in John Brown's house near what is today Brown's Ford. The act creating the county became effective on February 15, 1778, and the county celebrates its anniversary as February 15. It was named for the English political radical John Wilkes, who lost his position as Lord Mayor of the City of London due to his support for the colonists during the American Revolution.

Moonshine and the birth of NASCAR

Wilkes County was once known as the "Moonshine Capital of the World", and was a leading producer of illegal homemade liquor. From the 1920s to the 1950s some young Wilkes County males made their living by delivering moonshine to North Carolina's larger towns and cities. Wilkes County natives also used bootleg liquor as a means for barter far beyond the borders of North Carolina. Many Wilkes County distillers ran white liquor as far as Detroit, New Jersey and South Florida. Since this often involved outrunning local police and federal agents in auto chases, the county became one of the birthplaces of the sport of stock-car racing.

The North Wilkesboro Speedway was the first NASCAR (National Association of Stock Car Auto Racing) track; it held its first race on May 18, 1947 Wilkes County native and resident Junior Johnson was one of the early superstars of NASCAR, as well as a legendary moonshiner. Johnson was featured by the writer Tom Wolfe in a 1965 article for Esquire magazine titled "The Last American Hero Is Junior Johnson. Yes!", which gave him national exposure. Wolfe's vivid article was later adapted as the movie The Last American Hero (1973), starring Jeff Bridges and Valerie Perrine. Benny Parsons and Jimmy Pardue were two other notable NASCAR drivers from Wilkes.

The North Wilkesboro Speedway was closed following the 1996 NASCAR season. Two new owners, Bob Bahre and Bruton Smith, moved North Wilkesboro's NASCAR races to their tracks in Texas and New Hampshire. Speedway Associates, Inc., obtained a three-year lease and started running races and other events at the speedway. However, in May 2011, the group announced that funding had fallen through and they were ending their lease prematurely. 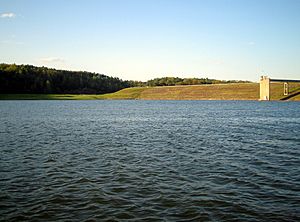 Wilkes County is located on the eastern slope of the Blue Ridge Mountains, a part of the Appalachian Mountains chain. The county's elevation ranges from 900 feet (375 meters) in the east to over 4,000 feet (1,219 meters) in the west. The Blue Ridge Mountains run from the southwest to the northeast, and dominate the county's western and northern horizons. Thompkins Knob, the highest point in the county, rises to 4,079 feet (1243 meters). The foothills and valleys of the Blue Ridge form most of the county's midsection, with some elevations exceeding 2,000 feet (610 meters). Stone Mountain State Park, located in the foothills of northern Wilkes County, is one of the most popular state parks in North Carolina, and is noted for its excellent rock climbing and trout fishing. The Brushy Mountains, an isolated spur of the Blue Ridge, form the county's southern border. Wilkes County's terrain gradually becomes more level and less hilly as one moves to the east; the far eastern section of the county lies within the Piedmont region of North Carolina. The largest river in Wilkes is the Yadkin River, which flows through the central part of the county. The county's three other major streams, all of which flow into the Yadkin, are the Reddies River, Roaring River, and Mulberry Creek. Following the devastating floods of 1916 and 1940, the US Army's Corps of Engineers constructed the W. Kerr Scott Dam and Reservoir on the Yadkin River four miles west of Wilkesboro. Opened in 1962, the dam created a lake with a shoreline of 56 miles. The lake is used for boating, swimming, fishing, and waterskiing; it is especially noted for its excellent bass fishing. The W. Kerr Scott lake is the largest body of water in Wilkes.

Due to its wide range of elevation, Wilkes County's climate varies considerably. In the winter, it is not unusual for it to be sunny with the temperature in the forties in the county's eastern section, while at the same time it is snowing or sleeting with the temperature below freezing in the county's mountainous north, west, and south. Generally speaking, Wilkes receives ample amounts of precipitation, with frequent thunderstorms in the spring and summer months; and rain, snow, sleet, and freezing rain all occur at times during the winter, with the frequency increasing with the altitude. Severe weather is not common in Wilkes but does occur. Tornadoes are rare, but severe thunderstorms can bring strong winds which can down trees and power lines, as well as cause hail. Wilkes County is far enough inland that hurricanes rarely cause problems, but a strong hurricane which moves inland quickly enough may cause damage, as with Hurricane Hugo in 1989. Due to the numerous creeks and streams which run through its valleys, Wilkes is especially prone to devastating flash floods. The two most memorable floods occurred in 1916 and 1940, killing a number of residents and causing millions of dollars in damages. Since the opening of the W. Kerr Scott Dam in 1962, the Yadkin River has not flooded in the county. Although Wilkes County has never had a severe earthquake, a fault runs through the Brushy Mountains, and mild earth tremors are not uncommon. On August 31, 1861 an earthquake estimated at 5.0 on the Richter magnitude scale hit the southern part of the county and caused minor damage.

Since colonial times Wilkes County has been overwhelmingly Protestant Christian. The two earliest churches to be established in Wilkes were the Episcopalian and Presbyterian. However, by the 1850s the Southern Baptists had eclipsed them, and the Baptists have remained the dominant church in Wilkes. The county also contains substantial numbers of Methodists, Presbyterians, Episcopalians, Pentecostals, and Church of the Brethren. Historically, few Roman Catholics lived in Wilkes, but recent immigration from other U.S. States and especially by people of Hispanic descent has increased their numbers. By contrast, relatively few Jews or members of other non-Christian faiths have settled in the county.

Wilkes County has strong musical roots, and those roots are displayed at the annual Battle of the Bands. Held in downtown North Wilkesboro in September, this rock festival features 20 professional and amateur bands from across the region, performing original music and competing for cash awards and, in some cases, record labels.

It also hosts the annual Shine to Wine Festival, also in downtown North Wilkesboro. Held on the first Saturday of May, the Shine to Wine festival pays tribute to the county's heritage of growing from the Moonshine Capital of the World to what is now recognized as a strong viticultural industry.

Wilkes County is also home to the annual Brushy Mountain Apple Festival, which is held in downtown North Wilkesboro the first weekend in October. The festival, which attracts over 160,000 visitors each year, is one of the largest single-day arts and crafts fairs in the Southern United States.

In 1988 legendary, Grammy-winning folk music guitarist Doc Watson and Bill Young started the Doc Watson Festival (later renamed the MerleFest music festival) in Wilkesboro. Held on the campus of Wilkes Community College, and named in honor of Doc's late son Merle Watson, MerleFest has grown into one of the largest folk and bluegrass music festivals in the United States, drawing an average of over 75,000 music fans each year. The festival has become the main fundraiser for the college, and brings over $10 million in estimated business and tourist revenues to Wilkes County and surrounding areas each year. 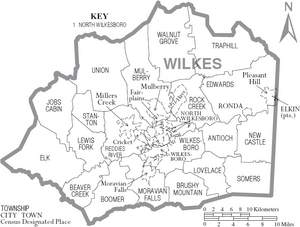 All content from Kiddle encyclopedia articles (including the article images and facts) can be freely used under Attribution-ShareAlike license, unless stated otherwise. Cite this article:
Wilkes County, North Carolina Facts for Kids. Kiddle Encyclopedia.