Yadkin County is a county located in the U.S. state of North Carolina. As of the 2010 census, the population was 38,406. Its county seat is Yadkinville.

The county was formed in 1850 from the part of Surry County south of the Yadkin River, for which it was named.

Yadkin County is located in the Piedmont region of central North Carolina. The Piedmont consists of rolling farmlands frequently broken by hills or valleys formed by streams. The extreme western section of the county contains the Brushy Mountains, a deeply eroded spur of the much higher Blue Ridge Mountains to the west. Yadkin County marks the eastern end of the Brushy Mountains range; none of the peaks rise more than 400–500 feet above the surrounding countryside. The highest point in the county is Star Peak near Jonesville, at 1,590 feet above sea level.

The Yadkin River forms the county's northern and eastern borders. The county takes its name from the river.

Two major four-lane highways serve Yadkin County. Interstate 77 runs north to south in the western part of the county and U.S. Highway 421 runs east to west. The two highways intersect near Hamptonville. The county also is served by U.S. Highway 21, which runs mostly parallel with I-77, and U.S. Highway 601, which runs through Yadkinville and Boonville. North Carolina Highway 67 is another popular artery that links the northern part of the county with Jonesville-Elkin and Winston-Salem.

Beginning in 2006, the Piedmont Authority for Regional Transportation (PART) began offering limited bus service between Boone, North Carolina and Greensboro, North Carolina as part of its US 421 Mountaineer Express. The buses make stops east and west in Yadkinville.

All of Yadkin County is included in the Yadkin Valley AVA, an American Viticultural Area recognized by the United States government as a unique grape-growing region. Wines made from grapes grown in this area may use the appellation "Yadkin Valley" on the label. Yadkin County is also home to the second North Carolina AVA, the Swan Creek Wine Region. 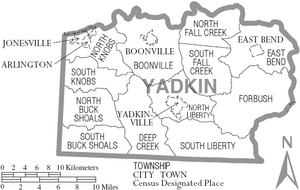 These towns were incorporated at one time:

All content from Kiddle encyclopedia articles (including the article images and facts) can be freely used under Attribution-ShareAlike license, unless stated otherwise. Cite this article:
Yadkin County, North Carolina Facts for Kids. Kiddle Encyclopedia.