John Bell (February 15, 1797 – September 10, 1869) was a U.S. politician, attorney, and plantation owner. A wealthy slaveholder from Tennessee, Bell served in the United States Congress in both the House of Representatives and Senate. He began his career as a Democrat, he eventually fell out with Andrew Jackson and became a Whig. In 1860, he was among a group of Presidential candidates defeated by Abraham Lincoln in a bitterly divided election that helped spark the American Civil War.

Bell was born in Mill Creek, a hamlet near Nashville, Tennessee. He was the son of local farmer Samuel Bell and Margaret (Edmiston) Bell. His father was a blacksmith and farmer. He graduated from Cumberland University in 1814 and studied law. He was admitted to the bar in 1816 and established a prosperous practice in Franklin. Entering politics, he successfully ran for the Tennessee State Senate in 1817. After serving a single term, Bell declined to run for reelection and instead moved to Nashville. He was elected to the Twentieth United States Congress in 1826, defeating Felix Grundy, who had the support of presidential candidate Andrew Jackson.

He served Tennessee's 9th Congressional District in the U.S. House of Representatives from 1827 to 1841. At first a strong supporter of Andrew Jackson, Bell broke with the Jacksonian Democrats in the fight over the controversial Bank of the United States. He served as Speaker of the House from 1834 to 1835. He was defeated for the post several other times by his rival, James K. Polk, a fellow Tennessee Congressman. Bell also served several terms as the chairman of the Committee on Indian Affairs and served on the Committee on Judiciary. 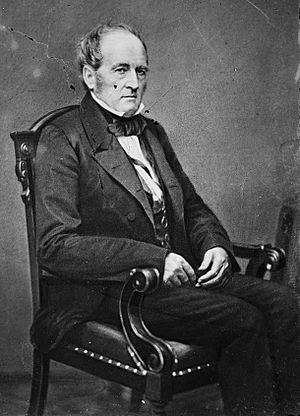 Bell then served briefly as Secretary of War under William Henry Harrison and John Tyler in 1841, but then resigned along with the rest of the Cabinet in protest at Tyler's vetoes of Whig bills. He returned to Tennessee and invested in railroads and manufacturing interests, while politically opposing Polk, who won the presidency in 1844 but failed to carry Tennessee through Bell's efforts. In 1847, Bell returned to local politics, being elected to the State House of Representatives. His majority Whig Party selected him for the United States Senate, where he served until 1859. A reluctant supporter of the Compromise of 1850, Bell was only one of two Southern senators (the other being Sam Houston of Texas) to vote against the Kansas-Nebraska Act.

Bell married twice, first to Sally Dickinson and then to Jane Yeatman after Dickinson's death.

After the collapse of the Whig Party in the 1850s, Bell was among the leaders of the small group (mostly border state and middle state Whigs) who attempted to preserve the Whig Party in another form, and became the Presidential candidate of the United States Constitutional Union Party. The way many people viewed the Constitutional Union Party, unfortunately, was that it was a desperate attempt to save the collapsing Whig Party. The moderate party was formed from a group of southern Whigs who joined with nativists from border states like Tennessee.

Abraham Lincoln of the Republican Party won the United States Presidential election of 1860 in the face of a four-way split of the votes. Bell won 39 electoral votes (13%) and 592,906 popular votes (13% of the total; 39% of Southern popular votes). Lincoln was not on the ballot in several southern states. Bell carried Virginia, Kentucky, and Tennessee, largely as a result of the division of Democratic votes between John C. Breckenridge (Democratic candidate representing the South) and Stephen A. Douglas (representing the Northern United States), but received less than 3% of the vote in Northern states.

Initially opposed to secession, he travelled to Washington D.C. to meet with President Lincoln. Bell was initially successful in helping hold Tennessee in the Union after states in the Deep South seceded. However, after the secessionist firing on Fort Sumter in South Carolina and Lincoln's call up of troops in response to this attack, Bell reluctantly accepted Tennessee's subsequent secession and retired from politics, his spirit broken and in ill health. He joined a group of investors in saltworks and ironworks, purchasing a shared interest in the Cumberland Furnace near Charlotte, Tennessee. However, most of his businesses were severely damaged or ruined during the Civil War. In 1869 Bell died at his home on the banks of the Cumberland River, near the Cumberland Furnace not far from Dover, Tennessee. He was buried in Nashville's Mt. Olivet Cemetery.

All content from Kiddle encyclopedia articles (including the article images and facts) can be freely used under Attribution-ShareAlike license, unless stated otherwise. Cite this article:
John Bell (Tennessee politician) Facts for Kids. Kiddle Encyclopedia.