Know Nothing facts for kids

The Know Nothing movement was a nativist American political movement of the 1850s. It was empowered by popular fears that the country was being overwhelmed by Irish Catholic immigrants, who were often regarded as hostile to American values and controlled by the Pope in Rome. Mainly active from 1854–56, it strove to curb immigration and naturalization, though its efforts met with little success. There were few prominent leaders, and the largely middle-class and Protestant membership fragmented over the issue of slavery, most often joining the Republican Party by the time of the 1860 presidential election. 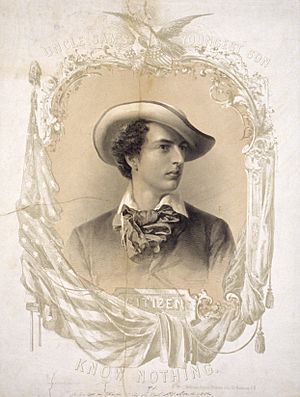 The movement originated in New York in 1843 as the American Republican Party. It spread to other states as the Native American Party and became a national party in 1845. In 1855 it renamed itself the American Party. The origin of the "Know Nothing" term was in the semi-secret organization of the party. When a member was asked about its activities, he was supposed to reply, "I know nothing." The lead editorial of the New York Times for Sunday, May 20, 2007, on a proposed immigration bill, referred to "this generation's Know-Nothings...."

The platform of the American Party called for, among other things:

All content from Kiddle encyclopedia articles (including the article images and facts) can be freely used under Attribution-ShareAlike license, unless stated otherwise. Cite this article:
Know Nothing Facts for Kids. Kiddle Encyclopedia.