MerleFest is an annual "traditional plus" music festival held in Wilkesboro, North Carolina on the campus of Wilkes Community College. The festival, which is held the last weekend in April, was hosted by Grammy Award winner Doc Watson prior to his death and is named in memory and honor of his son, Eddy Merle Watson, who died in a farm tractor accident in 1985. 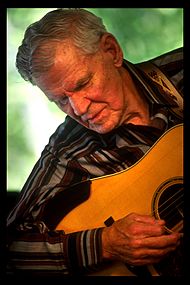 The festival, founded in 1988 by Doc Watson, is the primary fundraising event for Wilkes Community College and attracts crowds consistently exceeding 75,000 in number, making it one of the largest music festivals in the United States. It is estimated that the festival brings over $10 million in business and tourist revenue to Wilkes County and surrounding areas each year.

The music is spread across 13 different stages and four days, which provides festival visitors with a wide variety of musical venues, groups, and styles to choose from. MerleFest offers a mix of traditional and contemporary roots music, a music blend that Doc himself named "traditional plus." It brings together Bluegrass, contemporary acoustic, blues, folk, old-time music, Cajun, jazz, country, Celtic, Americana, rock and singer-songwriter music. Artists can often be enjoyed in on-stage jam sessions featuring unusual combinations of musicians, such as Bob Weir, formerly of the Grateful Dead singing with Sam Bush and Gillian Welch with the Waybacks.

All content from Kiddle encyclopedia articles (including the article images and facts) can be freely used under Attribution-ShareAlike license, unless stated otherwise. Cite this article:
MerleFest Facts for Kids. Kiddle Encyclopedia.