North Wilkesboro is a town in Wilkes County, North Carolina, United States. The population was approximately 4,116 at the 2000 census and is now 4,245 as of the 2010 census. North Wilkesboro is the birthplace and original home of Lowe's Home Improvement, which continues to have a major presence in the community. The town is also known as one of the birthplaces of the sport of stock-car racing, and the North Wilkesboro Speedway was the first NASCAR-sanctioned track. Due to the town's proximity to the nearby Blue Ridge Mountains and the numerous tourist venues there, North Wilkesboro has been nicknamed the "Key to the Blue Ridge".

North Wilkesboro was founded in 1891 when the Norfolk and Southern Railroad built a railroad line into Wilkes County. The line ended on the northern bank of the Yadkin River opposite Wilkesboro, the county seat. The town of North Wilkesboro quickly developed around the railroad tracks. North Wilkesboro was the home of the Carolina Mirror Company, which for many years was the largest mirror factory in the United States. Although this is no longer the case, the town remains close to the industry through Gardner Glass Products Inc. Lowe's Foods, one of the Southeast's largest supermarket chains, was started in North Wilkesboro in 1954. Lowe's Home Improvement Warehouse, the nation's second-largest chain of home-improvement stores, was started in North Wilkesboro in 1946. Like many small towns and cities in rural North Carolina, North Wilkesboro has suffered since 1990 from the closing of nearly all of its textile and furniture factories, which have moved to low-wage locations in Latin America and Asia. The factories were a major part of the town's economic base. North Wilkesboro does continue to host large corporate offices including Gardner Glass Products Inc., Window World, and ECMD.

The North Wilkesboro Speedway, located just outside the city limits, predates the founding of NASCAR; the speedway held its first race on May 18, 1947 The North Wilkesboro Speedway held NASCAR races for 50 years; on September 29, 1996 Jeff Gordon would win the final race to be held at the speedway. In 1995, following the death of long-time owner and track founder Enoch Staley, the speedway was purchased by two new owners, Bob Bahre and Bruton Smith. Soon after their purchase, both men announced that they were closing the speedway and moving its two NASCAR race dates to their new tracks in Texas and New Hampshire. The decision met with strong criticism from race fans. Since 1996 several unsuccessful attempts have been made to purchase and reopen the speedway to racing. 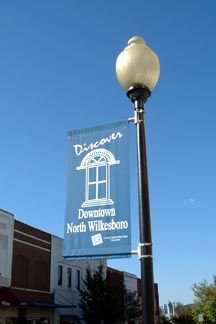 The Downtown North Wilkesboro Partnership is also the founder of the annual 'Shine to Wine Festival. Over the past 20 years, numerous local farmers have moved into the winemaking industry and the wine festival gives local wineries and vineyards a chance to display and publicize their wines. The festival also traces the historical development of Wilkes County liquor from moonshine to wine. The 'Shine to Wine festival is held on the first Saturday in May. Other downtown North Wilkesboro festivals include the Downtown Concert Series and Light Up Downtown.

North Wilkesboro is the home of the annual Brushy Mountain Apple Festival, which is held to celebrate the apple harvest from the nearby Brushy Mountains. Crowds of over 160,000 people usually attend the festival, and it is one of the largest single-day arts and crafts fairs in the Southern United States. The festival features music, dancing, artwork, crafts, and food traditional to the Southern Appalachian Mountains. The streets of downtown North Wilkesboro, NC are filled with over 425 arts and crafts, 100 food concessions, and 4 different music stages consisting of Blue Grass, Country, Folk, Gospel, and Appalachian Heritage. Cloggers, folk dancers, rope skippers, and square dancers provide additional entertainment venues for festival goers. Appalachian Heritage crafts such as woodcarving, chair making, soap making, pottery throwing, and quilting are highlighted. Local apple growers set up throughout the festival selling their apples, apple cider, and dried apples.

Light Up Downtown is an annual downtown event focused on the beginning of the Christmas season and the inaugural first day of decorative lights in downtown North Wilkesboro. Santa always makes an appearance to listen to all the children's Christmas wishes. Free pictures are always available to take with Santa. Hayrides are also available to ride around the downtown and enjoy the Christmas lights and decorations. In addition, many food, craft, and merchandise vendors are lined down Main Street. Downtown Retailers are always open late to kickoff the Christmas shopping. 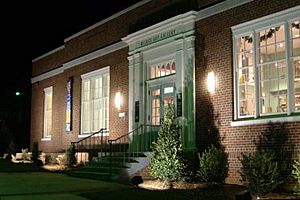 The Wilkes Art Gallery was founded in 1962 in the parlor of art patron Annie Winkler's home and in 2004 moved into the renovated North Wilkesboro Post Office building located in the heart of downtown North Wilkesboro. The Gallery's 10,000-square-foot (930 m2) facility includes over 3,500 square feet (330 m2) of exhibition space, an education center with a complete ceramics studio, painting and drawing studios, two multi-purpose classrooms, and a Gallery Gift Shop. The Gallery provides quality educational experiences through exhibits, classes and workshops for all ages. The Gallery also sponsors several "Gallery Crawls" per year, which bring both citizens and tourists downtown to enjoy good wine, good friends, and great art. Recently, a group of local students painted a cultural mural on the back of the Gallery. Below, is a picture of the recent Mural Project in the back of the Gallery. 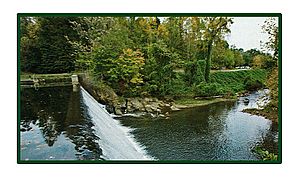 North Wilkesboro is located at 36°10′15″N 81°8′31″W﻿ / ﻿36.17083°N 81.14194°W﻿ / 36.17083; -81.14194 (36.170910, -81.142048), along the Yadkin River at the mouth of the Reddies River. North Wilkesboro has long been known as the "Key to the Blue Ridge" and is adjacent to the Brushy Mountains, Stone Mountain State Park, and the Blue Ridge Parkway. Located a few miles away, the W. Kerr Scott Dam and Reservoir offers its visitors a pristine wilderness to go mountain biking, boating, swimming, camping, picnicing, hunting, and fishing around its 55-mile (89 km) shoreline. The Town of North Wilkesboro is located in the heart of Wilkes County, North Carolina in the northwestern corner of the state. Wilkes County is bordered by eight (8) counties. These include the counties of Alexander, Alleghany, Ashe, Caldwell, Iredell, Surry, Watauga, and Yadkin; thus making the town conveniently juxtaposed to eight county seats and economic hubs; all within a 45-minute drive from town. The town corporate limits cover approximately 7.5 square miles (~ 4,800 acres) of contiguous property with approximately 300 acres in satellite territories. The Extraterritorial Jurisdiction (ETJ) encompasses roughly 16 square miles (41 km2) or 10,240 acres. The town is bordered to the south by the Yadkin River and the Town of Wilkesboro. Running through the eastern portion of the town is the Reddies River which flows from North to South and unites with the Yadkin.

The Town is approximately 20 minutes west of Interstate-77. Interstate-77 allows shipping/transportation up and down the east coast. The Town serves as the junction point for NC State Highways 18 and 268 and is within one mile (1.6 km) to the north of US Highway 421. US 421 passes by the Town and allows transportation to the nearby cities of Winston-Salem (to the east) and Boone (to the west), the home of Appalachian State University. The town is also served by NC Highway 115 and is close in proximity to NC Highway 16.

North Wilkesboro rests in the foothills to the east of the Blue Ridge escarpment; which encompass the western edge of Wilkes County. The town’s position in relation to the abutting mountain system accounts for the mild, yet wet winters and summers. The average annual maximum temperature is 68.9 degrees Fahrenheit with a corresponding minimum annual temperature average of 42.8 degrees. Average annual rainfall (50.0 inches) for the town falls just short of the typical average of the Southern Appalachian region (60.0+ inches). As winter clouds approach from the west and migrate across the Blue Ridge, an orographic effect ensues which releases an amount of snow in the Western high country, leaving little for central and eastern Wilkes County as the systems passes over. The result is more of a wintry mix of sleet and frozen rain, hence the 9.9 inches of average total snowfall, but the lack of any snow depth. <section begin="weather box" />

There were 1,639 households out of which 45.2% had children under the age of 18 living with them, 38.1% were married couples living together, 15.1% had a female householder with no husband present, and 42.5% were non-families. 39.3% of all households were made up of individuals and 17.3% had someone living alone who was 65 years of age or older. The average household size was 2.25 and the average family size was 3.01.

All content from Kiddle encyclopedia articles (including the article images and facts) can be freely used under Attribution-ShareAlike license, unless stated otherwise. Cite this article:
North Wilkesboro, North Carolina Facts for Kids. Kiddle Encyclopedia.