Watauga County ( wə-TAW-gə) is a county located in the U.S. state of North Carolina. As of the 2010 census, the population was 51,079. Its county seat and largest town is Boone. The county is in an exceptionally mountainous region. It is the home of Appalachian State University, which has approximately 20,023 students as of August 20, 2020. Watauga County comprises the Boone, NC Micropolitan Statistical Area.

The county was formed in 1849 from parts of Ashe, Caldwell, Wilkes, and Yancey counties. It was named for the Watauga River, whose name is said to be a Native American word, the meaning of which is in dispute among various histories with translations ranging from beautiful water, whispering waters, village of many springs, and river of islands, to name a few. 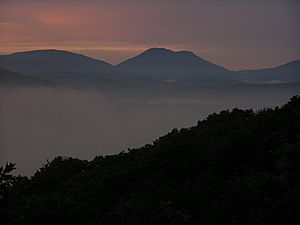 Watauga County is extremely mountainous, and all of the county's terrain is located within the Appalachian Mountains range. The highest point in the county is Calloway Peak, the highest peak of Grandfather Mountain (shared with the adjacent counties of Avery and Caldwell), which rises to 5,964 feet (1,818 meters) above sea level. At an elevation of 5,506 feet (1,678 meters) above sea level, Beech Mountain is the highest incorporated community east of the Mississippi River. Boone, the county's largest city and county seat, has the highest elevation (3,333 feet) of any city over 10,000 population in the Eastern United States.

As with most of North Carolina's High Country, the climate of Watauga County is that of a Humid continental climate characterized by considerably cooler and more drastic weather than other parts of the state. Dramatic and unexpected changes in the weather are not uncommon in the county, particularly when it comes to precipitation. This is partly due to the elevation of the county, and partly due to orographic lifting, which causes precipitation to fall more readily in Watauga County than in lowland areas to the east. Summers can be very warm with temperatures commonly in the 80s and on a rare occasion in the 90s. snow usually starts in November, and there can be snow falls in April, although this is not usual. Windy conditions, also, tend to be amplified across the county due to the rugged terrain and high elevation. Many people have noted that the winters of Watauga County tend to resemble those of the northern United States instead of the South.

Because of the cold weather in Watauga County, the area is home to several ski resorts. Among them is Appalachian Ski Mountain.

No commercial airports or passenger train depots are nearby. AMTRAK serves High Point and Winston-Salem in the nearby Piedmont area, and Piedmont Authority for Regional Transportation (PART) bus provides connecting shuttle service to Watauga County. A helipad is in service at the Watauga Medical Center. A small general aviation airstrip (FAA Identifier: NC14) is located in Boone. Commercial airline passengers typically utilize the airports at Charlotte, Greensboro, and Raleigh-Durham in North Carolina, or Tri-Cities in Tennessee. There is a public transport system in Boone provided by Appalcart that services the downtown and some outlying areas, with special routes to rural areas and intercity transit routes to Wilkes, Winston-Salem, Greensboro, Lenoir, Hickory, Lincolnton, Gastonia and Charlotte for a small fee. 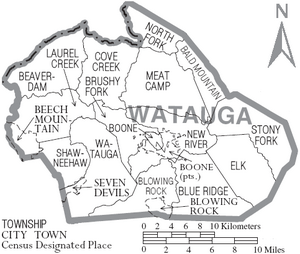 All content from Kiddle encyclopedia articles (including the article images and facts) can be freely used under Attribution-ShareAlike license, unless stated otherwise. Cite this article:
Watauga County, North Carolina Facts for Kids. Kiddle Encyclopedia.