Valle Crucis in an unincorporated community located in Watauga County, North Carolina, United States. The name of the town is Latin for "Vale of the Cross," a reference to a valley in the area where three streams converge to form a shape similar to an archbishop's cross. The community is located along NC 194, between the towns of Banner Elk and Boone.

There was scattered settlement in the region in the 1840s when an Episcopal missionary, Levi Silliman Ives, came to the area. He founded the first Episcopal church in the region, "Easter Chapel", and lived in the area for the remainder of his life. While there, he founded the Valle Crucis Mission School, which has had several purposes throughout its history and currently serves as a conference and retreat center, hosting (among other things) the Jink and Diddle School of Scottish Fiddling. Skiles also founded the first Monastic order within the Episcopal Church in the United States, the Brotherhood of the Holy Cross. Holy Cross Episcopal Church, located in Valle Crucis, is a direct successor to Easter Chapel. The church building, c. 1926, is modeled on a now-defunct medieval monastery in Wales and is noteworthy for its architecture. Regular services are still held at the church. The region was a significant missionary area for the Episcopal Church in the 19th century. This brought some degree of outside influence and progress to an area that was otherwise isolated from the rest of the state and world.

During the past 25 years, Valle Crucis has transformed from a little-known rural community in western Watauga County to a popular destination for vacationers and new residents. The valley's scenic beauty and situation in the Blue Ridge Mountains have been major factors in the recent growth of Valle Crucis. Where crumbling buildings or open pastureland were once located in the 1970s, one can now find new and revitalized businesses catering to visitors, including beds and breakfasts and restaurants. The Mast General Store, located in the heart of the Valle Crucis community, is now a major stop for visitors to the area.

Weather ranges from warm summer days and cool summer evenings to cold or even bitterly cold winter nights. Rainfall is moderate, averaging 43 inches (1,100 mm) per year. Severe storms are rare. Snowfall occurs in the winter with some accumulation to be expected several times between December and April. Snowpack is inconsistent. The area is also known for being one of the lowest and most quickly flooded in the region. The heart of Valle Crucis, including the bulk of the stores, the elementary school, and community park is a particularly low lying and flat in comparison to the mountainous terrain of the surrounding areas. Flooding is not an extremely rare event and can inhibit many functions of the town, such as the well known occasional flooding of the bridge on DeWitt Barnett Road, inhibiting access from that side of the town. 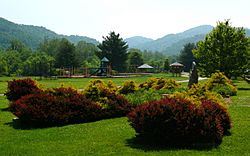 The Valle Crucis Community Park is also a must for visitors and residents alike. Formed in 1983, the park is a privately owned 501(c)3 nonprofit organization that relies on donations and use fees for its existence. The park's amenities include large covered picnic shelters, three playground areas for children, restrooms, a 1-mile paved walking/jogging/biking/skating path, access to the Watauga River for wading and fly-fishing, as well as ample open space for active and passive recreation. The park also provides opportunities for environmental education, including a restored wetland area and a recent stream bank restoration project along Dutch Creek. In 2015 the park will open a Welcome and Environmental Education Center that will provide indoor meeting and event space for the community.

The community is also host to a kindergarten through 8th grade elementary school that typically has an enrollment in the 5th century.

In June, the Valle Crucis Elementary School is the start / finish point of the "Blood, Sweat and Gears" bicycling event of 100 and 50 mile routes travelling through the area surrounding Valle Crucis, and includes 8,000 feet of cumulative climbing on the century route, with a challenging climb up nearby Snake Mountain at milepoint 63. Over 1000 participants ride over the combined routes, making it one of the most popular cycling events in the North Carolina mountain region.

All content from Kiddle encyclopedia articles (including the article images and facts) can be freely used under Attribution-ShareAlike license, unless stated otherwise. Cite this article:
Valle Crucis, North Carolina Facts for Kids. Kiddle Encyclopedia.