The county is the newest of North Carolina's 100 counties. It was formed in 1911 from parts of Caldwell County, Mitchell County, and Watauga County. It was named for Waightstill Avery, a colonel in the American Revolutionary War and the first Attorney General of North Carolina (1777–1779). It is often noted for the large amount of Christmas trees that the county produces. 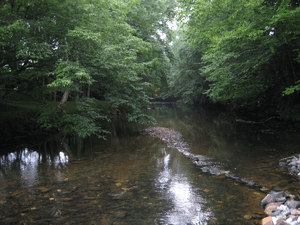 Stream within a Linville community

Avery County is extremely rural and mountainous with all of the county's terrain located within the Appalachian Mountains range. The highest point in the county is Grassy Ridge Bald, 6,165 feet (1,879 m) above sea level. Most of Grandfather Mountain (whose highest point is Calloway Peak 5,946 feet (1,812 m) shared with Watauga and Caldwell counties) is within Avery county. At 5,526 feet (1,678 m), Beech Mountain (also shared with Watauga county) is the highest incorporated community east of the Mississippi River. At 3,606 feet (1,099 m) Newland is the highest county seat in the Eastern USA.

The county's public hospital is Charles A. Cannon Memorial Hospital in Linville, a campus of Appalachian Healthcare System. The hospital is centrally located in Linville and opened in 2000, to consolidate and replace the old Cannon Hospital located in Banner Elk and Sloop Hospital located in Crossnore. The new campus also hosts the Sloop Medical Building, which houses various doctor's offices, the local YMCA complex, and a pharmacy. The hospital is a critical care facility with a 24-hour emergency department as well as imagery, lab, surgery, and other services. It has 25 medical beds and ten psychiatric beds. Critical illnesses and injuries and trauma patients are often stabilized at Cannon, then flown or transported by ambulance to hospitals in Charlotte, Asheville, or Johnson City, Tennessee.

The Avery County Emergency Medical Service (EMS) is a full-time county department (since 1994). They provide paramedic-level emergency medical care via three ambulances and a supervisor's SUV at all times, at station locations across the county. Backup is provided by fire departments, a rescue squad and law enforcement first responders. 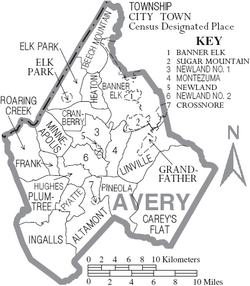 The population ranking of the following table is based on the 2010 census of Avery County.

Avery County Airport (7A8) is a small, public general aviation facility with no control tower. It primarily serves private aircraft and has no regularly scheduled commercial or cargo flights or major carriers. The facility jointly serves Avery and Mitchell Counties and is located on Grassy Creek Road, just off US19E near the Mitchell County Line in Green valley, 10 miles south of Newland and 4 miles east of Spruce Pine. It is jointly operated by both counties and has a 3000-foot-long runway that is 60 feet wide, with over runs at both ends in excess of 110 feet. The facility has private contractors who offer private air services, flying lessons and charter flights. The airport has seen increased usage in recent years and has been upgraded several times. The county has made cursory inquiries into resurfacing the airport to a heavier weight rating, to allow NC Air National Guard C-130 aircraft from Charlotte Douglass International Airport Air National Guard Base to conduct intermittent landing and "touch and go" combat exercises. The US Marine Corps on the NC coast at New River and Cherry Point Air Stations has also expressed an interest in conducting mountain landing training for Osprey vertical takeoff aircraft if the airport runway is thickened, as has the NC Army National Guard for its helicopters located in Salisbury. The Avery County runway is of sufficient length to accommodate large military aircraft, but not of sufficient surface thickness. Mission Hospital in Asheville has also been approached to possibly establish an air ambulance base at the airport.

A smaller private airport is also located in Banner Elk parallel to NC 194 at the Elk River Club resort; which is for residents and approved guests of the Elk River Property Owners Association.

Avery County Transportation (ACT) provides general public transportation vans for a fee. The service is by call, offering rides to various locations in the county and out-of-county medical rides. The transportation office and garage is located on NC 194, just north of the Newland city limits.

The county contains local attractions such as Grandfather Mountain, Grandfather Mountain State Park, Linville Gorge Wilderness, Linville Falls, Pisgah National Forest and the Blue Ridge Parkway, which all attract large numbers of visitors. In October, the annual "Wooly Worm" festival at the old school in downtown Banner Elk draws world visitors who come to see caterpillar races that locals happily claim can predict the severity of coming winters based on the fur coats of the worms. The Grandfather Mountain Highland Games is held each year the first full weekend after July 4 and is one of the largest Scottish gatherings outside Scotland and features bagpipes, bands, Scottish food, music, authentic clothing and games such as log and caber toss and use of dogs in sheep herding. Also in October is Oz Days at the former Land of Oz theme park on Beech Mountain in the fall also attracts visitors who love the legacy of the famous Judy Garland movie "The Wizard of Oz" based on Frank Baum's famous book. Oktoberfest on Sugar Mountain and Beech Mountain also in October draw large crowds and the annual Music Festival in Newland on July 4 also attracts many visitors.

The Avery Fairgrounds is located on Vale Road, just outside the Newland city limits. It is funded both by allocated county funds and private funding and controlled by a fair board. The Avery County Agricultural and Horticultural Fair has been an annual event in early September of each year and draws huge crowds to the site for rides, displays and other events.

Avery County is one of 420 counties and eight independent cities that fall into the Appalachian Region as defined by the US Government's Appalachian Regional Council (ARC). ARC was founded by President Lyndon B. Johnson in 1965 to address poverty in the 13 Eastern states of Appalachia. Avery is listed as "Transitional" by the ARC. Based on 2006 statistics from the US Government, the five classification categories for factors such as unemployment, income and poverty rate, the levels are: Distressed (worst), At-risk, Transitional, Competitive and Attainment. According to the Bureau of Labor Statistics, the unemployment rate as of August 2013 was 10.6% (not seasonally adjusted), down from 11.2% for 2012. According to Census American Community Survey data for 2011 the poverty rate is listed at 18.1%.

The county's agricultural focus is the mass production of Fraser Fir Christmas Trees. Tree farms produce trees year round and they are harvested in mid October, wrapped, stacked and sold in bulk at local or far away lots or shipped to wholesalers across the country. Some farms also sell directly to visitors. Shrubbery, landscaping and greenhouses all are important agricultural aspects of the county's economy, as is beef cattle farming.

In keeping with a growing trend in the NC mountains and foothills, grape growing and vineyards are becoming popular with three vineyards presently operating in the county in Banner Elk, Plumtree and Linville Falls. 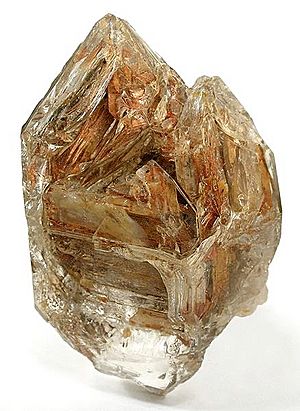 Avery County Schools has eight schools housed on seven campuses, ranging from pre-kindergarten to twelfth grade: five elementary schools, two middle schools and a central high school. Avery High School has close to 700 students and is located near Newland. It is scheduled for large-scale renovations by 2023. The Avery mascot is the Viking, and Avery athletics are a cornerstone of local culture. Football and wrestling programs have been historically prominent in regional conferences. An Army JROTC program is active, as is band, chorus and numerous student clubs. Avery High has a dual enrolment partnership program with Mayland Community College, which allows students to earn college credits while still in high school. The two county middle schools are: Avery Middle across from the High School built in 1978 and Cranberry Middle in Cranberry on a joint campus with Freedom Trail elementary near Elk Park was built in 1998. Other county elementary schools are located in: Newland (fully renovated in 2002), Crossnore Elementary was built on a new campus in 2003, Riverside Elementary in lower western Avery built in 1987 and the new Banner Elk Elementary, between Banner Elk and Sugar Mountain was built in 2011. All Avery elementary schools are newly built since 1987 or were renovated from between 1996 and 2011.

Three small local high schools were closed in 1969 with the opening of the present central Avery County High School near Newland. Crossnore High School was torn down in the early 1970s. The largest of the old high schools, Cranberry High School, is now preserved as a community center in Cranberry near Elk Park. Numerous older historic rock work schools built by the Depression-era Work Projects Administration (WPA) that had been community K-8 schools were closed, starting with the old Riverside School in 1987. Both Elk Park School and Minneapolis Schools were closed in 1998 and consolidated into the new Cranberry Middle-Freedom trail School. Beech Mountain school was the last K-8 school in Avery County. It was closed in 2008 and is now a community center. The area students were moved to Cranberry Middle-Freedom Trail School. The last WPA school still operating in the county was the old downtown Banner Elk School, which closed in 2011 and reopened on a new campus located between Banner Elk and Sugar Mountain.

All content from Kiddle encyclopedia articles (including the article images and facts) can be freely used under Attribution-ShareAlike license, unless stated otherwise. Cite this article:
Avery County, North Carolina Facts for Kids. Kiddle Encyclopedia.