The county is home to the "Mineral City of the World", Spruce Pine and Roan Mountain which includes the world's largest natural rhododendron garden, and the longest stretch of grassy bald in the Appalachian range. Throughout the year such festivals as North Carolina Mineral and Gem Festival and North Carolina Rhododendron Festival bring many people to the area. Mitchell County was one of the three entirely dry counties in North Carolina, along with Graham and Yancey, but in March, 2009, after much controversy, the Town of Spruce Pine approved beer, wine, and ABC store sales. However, alcohol sales are still illegal in the areas of the county outside the town of Spruce Pine, except areas within 1.5 air miles of the Blue Ridge Parkway.

The county was formed in 1861 from parts of Burke County, Caldwell County, McDowell County, Watauga County, and Yancey County. It was named for Elisha Mitchell, professor of mathematics, chemistry, geology, and mineralogy at the University of North Carolina from 1818 until his death in 1857. Dr. Mitchell was the first scientist to argue that a nearby peak in the Black Mountains was the highest point east of the Mississippi River. He measured the mountain's height and climbed and explored it. In 1857 he fell to his death on a waterfall on the side of the mountain. The mountain was subsequently named Mount Mitchell in his honor.

The county took a direct hit from "The Storm of the Century", also known as the "’93 Superstorm", or "The (Great) Blizzard of 1993". This storm event was similar in nature to a hurricane. The storm occurred between March 12–13, 1993, on the East Coast of North America. Parts of Cuba, Gulf Coast States, Eastern United States and Eastern Canada were greatly impacted.

The county suffered a tragic event on the evening of Friday, May 3, 2002 when a fire broke out at the Mitchell County jail in Bakersville, North Carolina. As a result of the fire eight men lost their lives.

According to the U.S. Census Bureau, the county has a total area of 222 square miles (570 km2), of which 221 square miles (570 km2) is land and 0.7 square miles (1.8 km2) (0.3%) is water. It is the fourth-smallest county in North Carolina by land area and second-smallest by total area. The northwest sections of county border the State of Tennessee. Sections of both the Blue Ridge Parkway and Appalachian Trail are located in the county. Parts of the Pisgah National Forest and Roan Mountain State Park are located in the northern sections of the county.

As of 2015, the largest self-reported ancestry groups in Mitchell County were: 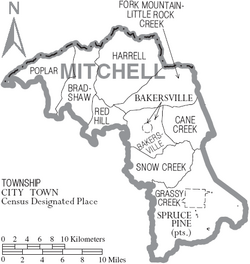 Mitchell High School is a comprehensive four-year high school (9-12) centrally located in the community of Ledger when built in 1978. The high school has achieved many educational and athletic accomplishments throughout its history.

Mayland Community College also calls Mitchell County home. Founded by an act of the North Carolina General Assembly in 1971, Mayland hosts some 35 curriculum programs and provides vocational and technical training, along with college transfer opportunities to residents of the region. Mayland was recently ranked 4th best community college in the nation according to 2010 Washington Monthly College Guide.

Penland School of Crafts is a world-renowned educational facility located in the Penland Community. It is designed to educate students who will apply workable knowledge in creation of books, paper, clay, drawing, glass, iron, metals, photography, printmaking and letterpress, textiles, and wood. Furthermore, Penland School of Crafts was established in the early 1920s, it is the largest and oldest professional crafts school in the United States.

Mitchell High School is in the Western Highlands 1A conference, which is made up of 6 schools with 3 of the schools classified as 1A. They have the smallest enrollment of the schools in their conference. Three neighboring counties' schools (Avery, Yancey (Mountain Heritage), and McDowell) are some of the common rivals of the Mountaineers.

All content from Kiddle encyclopedia articles (including the article images and facts) can be freely used under Attribution-ShareAlike license, unless stated otherwise. Cite this article:
Mitchell County, North Carolina Facts for Kids. Kiddle Encyclopedia.