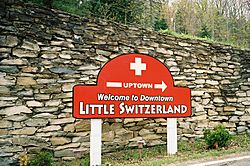 Little Switzerland is an unincorporated community in McDowell and Mitchell counties of North Carolina, United States. It is located along NC 226A off the Blue Ridge Parkway, directly north of Marion, North Carolina and south of Spruce Pine.

At this location, in 1909, the "Switzerland Company" was founded by North Carolina State Supreme Court Justice Heriot Clarkson. Covenants in the rules included no alcohol and one house per lot.

The group filed a suit against the construction of the Blue Ridge Parkway noting that it was seeking a right of way of 800 feet wide and through the resort and were not paying an adequate amount. The suit was settled with the Parkway getting 200 feet wide access and paying $25,000. It is now the narrowest point on the Parkway in North Carolina. The access to the Switzerland Inn is the only commercial access road on the parkway. There were other skirmishes between the resort and parkway including the parkway closing the road to Kilmichael (pronounced Kill-michael) Tower built by Little Switzerland atop Grassy Mountain. Little Switzerland lost the fight and the tower fell into disrepair. Its base is still visible.

The group got the Carolina, Clinchfield, and Ohio Railroad to locate a station approximately 4 miles from the community. They built a toll road to it - Etchoe (pronounced Et-chō) Pass Road. The tolls did not last long although the booths are still visible. It is now NC 226A.

The original Switzerland Inn was razed in the 1960s and a modern motor court was built by William Cessna.

Its naming illustrates the gradual change in meaning of the 19th century term little Switzerland from an area of limestone formations to one of mountainous appearance.

Famous oboist John Mack used to hold an annual "John Mack Oboe Camp" in the community before his death in 2006. The camp continues to be hosted every summer by many of his students.

The Church of the Resurrection was added to the National Register of Historic Places in 1999.

All content from Kiddle encyclopedia articles (including the article images and facts) can be freely used under Attribution-ShareAlike license, unless stated otherwise. Cite this article:
Little Switzerland, North Carolina Facts for Kids. Kiddle Encyclopedia.