The Clinchfield Railroad (reporting mark CRR) was an operating and holding company for the Carolina, Clinchfield and Ohio Railway (reporting mark CCO). The line ran from the coalfields of Virginia and Elkhorn City, Kentucky, to the textile mills of South Carolina. The 35-mile segment from Dante, Virginia, to Elkhorn City, opening up the coal lands north of Sandy Ridge Mountains and forming a connection with the Chesapeake and Ohio Railway at Elkhorn City, was completed in 1915.

The Clinchfield was the last Class I railroad built in the U.S. east of the Rocky Mountains. The 266-mile railroad provided access to numerous scenic wonders of the Appalachian region and is probably best known for the state-of-the-art railroad engineering techniques applied in its construction, as exemplified by the Clinchfield Loops climbing the Blue Ridge Mountains north of Marion, North Carolina.

The Clinchfield Railroad began operating the line December 1, 1924, and for many years it was leased jointly by the Atlantic Coast Line Railroad and Louisville and Nashville Railroad. When the L&N merged with the ACL's successor, the Seaboard Coast Line Railroad, effective January 1, 1983, forming the Seaboard System Railroad, the separate operating company was unnecessary and was merged into the Seaboard. The line is now owned and operated by CSX Transportation as their Blue Ridge Subdivision (Spartanburg to Erwin, Tennessee) and Kingsport Subdivision (Erwin to Elkhorn City).

In 1886 ex-Union Gen. John T. Wilder received a charter for the Charleston, Cincinnati and Chicago Railroad, commonly referred to as the "Triple C" Railroad. This was the beginning of the modern Clinchfield. The promoters proposed a 625-mile line from Ironton, Ohio, to Charleston, South Carolina, with an extension down the Ohio River to Cincinnati. It would serve the rich agricultural lands of the Piedmont, the summer resorts of the North Carolina mountains, the rich timber and mineral deposits and coal fields of Virginia and Kentucky, with terminals on both the Ohio River and the Atlantic seacoast. The estimated cost was $21 million, equal to $496,377,778 today. Johnson City, Tennessee, was established as the headquarters for the Triple C Railroad and that city became a railway boom town.

Built north and south from Johnson City, tracks reached Erwin, Tennessee, in 1890. Grading was 90% complete from Johnson City to Dante, Virginia, in 1893 when the Triple C had financial problems and failed in the national depression of that year. In July 1893, the assets of the Triple C Railroad were sold at a foreclosure for $550,000, equal to $13,000,370 today. The new owners renamed it the "Ohio River and Charleston Railroad." The construction continued halfheartedly and in 1897 owners began to sell off the railroad in segments. 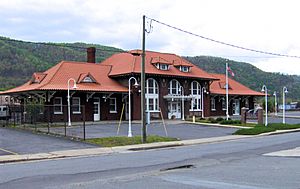 At the time an enterprising entrepreneur, George Lafayette Carter, was involved in developing the coal lands of southwestern Virginia and needed a railroad to transport his coal to a seaport. In 1902, he purchased the Ohio River and Charleston Railroad, renamed it the Clinchfield Railroad, and organized a gigantic construction program. Between 1905 and 1909 the road was completed from Dante, Virginia, to Spartanburg, South Carolina. Carter got financing to build to high standards and Clinchfield has not had to reduce grades, lighten curves, and enlarge tunnels to handle larger equipment as other railroads have had to do. (The main line retains many 14° curves, though.) Carter established the Clinchfield's headquarters in Johnson City, Tennessee, but later moved it to Erwin, Tennessee, when he could not get land for the shops and classification yards. Erwin remained Clinchfield's headquarters thereafter.

A station was built in 1910 near Little Switzerland, North Carolina, for visitors to the resort. The resort built Etchoe Pass Road, a 4-mile long toll road, connecting to it. The tolls were lifted and the road is now North Carolina Highway 226A. The toll booths are still visible. The station's original name was Mount Mitchell Station but it was subsequently changed to Little Switzerland.

The Clinchfield lost its identity in the mid-1970s when it came under the "Family Lines System" banner, a marketing name for Seaboard Coast Line, L&N, and several smaller railroads. The Clinchfield is remembered for is its famous "Santa Claus Special" that debuted in 1943 from encouragement from several Kingsport businessmen and ran the length of the Clinchfield's main line between Elkhorn City and Kingsport, Tennessee handing out gifts to the children along the route. Today, it is operated by CSX Transportation with the Kingsport Area Chamber of Commerce and is now known as the "Santa Train".

Most of their traffic was coal trains, but the Clinchfield did operate a few scheduled Freight Trains. Northbound Clinchfield trains had odd numbers and southbound even (most railroads used even numbers for northbound trains). This was done so that their trains would mesh in with connecting trains from the SCL on the south end at Spartanburg and the C&O on the north end at Elkhorn City. Below is a sample of the Freight Trains between Spartanburg, S.C., and Erwin, Tennessee:

All content from Kiddle encyclopedia articles (including the article images and facts) can be freely used under Attribution-ShareAlike license, unless stated otherwise. Cite this article:
Clinchfield Railroad Facts for Kids. Kiddle Encyclopedia.