McDowell County is a county located in the U.S. state of North Carolina. As of the 2010 census, the population was 44,996. Its county seat is Marion.

Archaeological excavations performed by Dr. David Moore, during the early 1980s, revealed the earliest inhabitants of McDowell County to be from the Mississippian and Woodland eras. Dr. Moore discovered evidence in an area close to the Catawba River in and around an unusual topographical site known as Round Hill. These early Native Americans lived in this section prior to Juan Pardo's exploration of the region.

Cherokee and Catawba Indians were known inhabitants of what is now McDowell County.

In 1566, the Spanish explorer Juan Pardo came to Western North Carolina traveling through the area that is now McDowell county. His purpose was to acquire territory for Spain, but he had also hoped to find precious metals. Pardo and his men built a log blockhouse at the headwaters of the Catawba River. Apparently intimidated by the formidable range of the Blue Ridge Mountains and the home of the Cherokee Nation, Pardo left the area the following year.

In 1748, "Hunting" John McDowell received a land grant for property known today as "Pleasant Gardens" including acreage originally located from Swan's Pond (Catawba County) up the Catawba River west to present day Marion and into the region known as Buck Creek. During a hunting expedition with his friend Henry Weidner, the two came upon a lush green valley with thousands upon thousands of acres of virgin forest. During that time, it was customary when settling a dispute to engage in a "friendly" wrestling match. McDowell came out the winner.

"Hunting" John McDowell received two land grants and after establishing residence along the Catawba River of Pleasant Gardens, raised his family. He is noted in Max Dixon's book The Wataugans as being instrumental in Jacob Brown's Purchase of one of the last remaining pieces of acreage along the Nolichucky River in Tennessee when he hosted a negotiations with the Cherokee on his farm in North Carolina.

His son, Joseph McDowell, is noted in history as a significant contributor to the Battle at Kings Mountain. McDowell County is named in his honor. Today, his home stands as one of the few remaining homes in North Carolina still standing and built by its namesake.

The settlement of Old Fort was later established and it had become the westernmost outpost of Colonial civilization at the time. These early pioneers established a close community protected by a series of forts which remained active until the early 19th century. Thus, Old Fort. 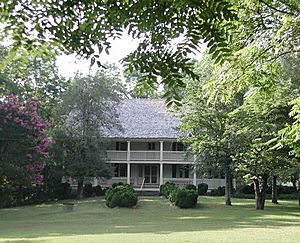 In 1793, Colonel John Carson built a plantation house near Buck Creek in the Pleasant Gardens community, which still stands today as the Historic Carson House. He also operated gold mines in the southern part of the county. Colonel Carson was a significant historical figure in the American Revolutionary War.

Marion, the county seat of McDowell County, was planned and built on land selected by the first McDowell County Commissioners on March 14, 1844 at the Historic Carson House. It was not until 1845, however, that the official name of Marion was sanctioned as the county seat by the state legislature. The name of Marion came from Francis Marion, the American Revolutionary War hero, known as the “Swamp Fox” and the man upon whom the movie "The Patriot" was based.

During the Carolina Gold Rush period of the early 19th century, the south county area was known for its gold production. The banks of the Muddy Creek and mines at Vein Mountain were productive areas. Many mines and thriving gold rush towns such as Brackettown no longer exist, although scattered ruins and cemeteries mark many locations of the gold rush period.There were other mines in the area also including an old mine in Woodlawn. In that community someone opened a mine on Tom's Creek which may have been a Mica mine. There are remnants of the a sorting house and the old mine shaft itself. Who opened and ran this mine is unknown.

McDowell County is rich in American Civil War History. The movie The Last of the Mohicans was filmed along the shores of the picturesque Lake James.

McDowell County was first formed in 1842 from parts of Burke County and Rutherford County. It was named for Joseph McDowell, a Revolutionary War leader and hero of the Battle of King's Mountain, and a member of the United States House of Representatives from 1797 to 1799.

Numerous small creeks and streams flow through the county. The Catawba River crosses the county and empties into Lake James. It flows over Catawba Falls on its way, which is accessible to the public. Other waterfalls can be found in the county, such as Toms Creek Falls. Almost half of the county, including the two aforementioned waterfalls, is located inside the Pisgah National Forest. Linville Caverns, North Carolina's only limestone cavern system open to the public, is located in the far northern part of the county.

Geologically, McDowell County is located within the southern Appalachian Mountains region. The Blue Ridge Parkway closely follows the northwestern boundary of the county. McDowell County rises rapidly from the Piedmont (United States) in its extreme eastern border where elevations average about 1200 feet above sea level, to the Blue Ridge Mountains in the north and west. Its highest point is Pinnacle -- at 5,665 feet above sea level the second-highest mountain (after Grandfather Mountain) in the Blue Ridge), and also considered the southernmost tip of the Black Mountains, the highest ridge in eastern America. Much of the county lies in the Foothills (North Carolina) region of Western North Carolina. 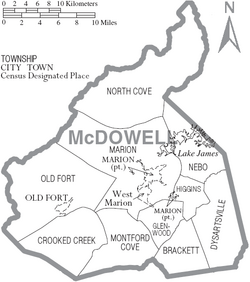 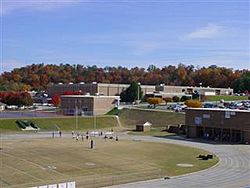 View of McDowell High from the football stadium

The following is a list of schools located in McDowell County:

All content from Kiddle encyclopedia articles (including the article images and facts) can be freely used under Attribution-ShareAlike license, unless stated otherwise. Cite this article:
McDowell County, North Carolina Facts for Kids. Kiddle Encyclopedia.