Old Fort is a town in McDowell County, North Carolina, United States. The population was 908 at the 2010 Census.

George Davidson owned Old Fort Plantation, where it was believed settlers built a fort in the early 1700s that later became "the westernmost outpost of Colonial civilization". Once the railroad reached the area, a hotel and depot were built. In 1871, Sanborn Worthen, who fought in the American Civil war, bought Old Fort Plantation and changed the name to Catawba Ville. He hoped the railroad would build its yard there, but this did not happen. 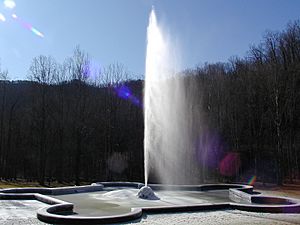 In 2010, the North Carolina Wildlife Commission added Old Fort to their list of N.C. Mountain Heritage Trout Towns. This designation includes a special $5.00 fishing license that is active for three days and is good for use in any of the state's mountain trout towns. In downtown Old Fort, the section of Mill Creek bordering Mountain Gateway Museum at 102 Water Street is a public portion of this stream and is a delayed harvest stream.

Old Fort has several attractions, including Andrews Geyser and the Arrowhead Monument. The granite arrowhead was built as a symbol of peace between the two Native American tribes; the Cherokee and Catawba. At the dedication ceremony in 1930, thousands of onlookers gathered at town square to see the 14 ft. rose granite arrowhead sitting atop a natural stone base. The Arrowhead serves as the focal point for the town, which is traversed by U.S. Highway 70 and Interstate 40. Additionally, residents of Old Fort are reconstructing Davidson Fort, the Revolutionary War fort that gave Old Fort its current name. Catawba Falls, the largest waterfall in McDowell County and the headwaters of the Catawba River, is located just outside the town limits. In 2009, a partnership between the N.C. Department of Transportation, the local county and town governments with assistance from the United States Forest Service and the local trails association, a portion of Old Highway 70 reopened to bicycle and foot traffic. Point Lookout Trail is a popular paved trail ascending almost 1,000 feet through the Swannanoa Gap in just under 4 miles. Point Lookout was once a popular tourist stop for travelers driving west to Asheville and the Great Smoky Mountains.

In prior years the town was well known for its weekly mountain music concerts, which attracted large audiences and many musicians from the surrounding areas to Old Fort's downtown each Friday night for a free bluegrass concert in the historic Rockett Building. In mid 2014 the organization that ran the mountain music lost their arrangement with the building owner, and the weekly music shows came to an end after 27 years.

The Welsford Parker Artz House and Old Fort Commercial Historic District are listed on the National Register of Historic Places.

Old Fort, NC temperatures average in the 80s in the summer and in the 20s for lows in the winter. 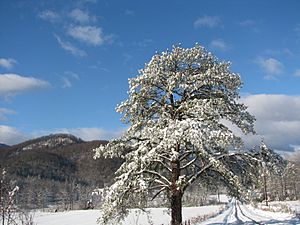 Snow in Old Fort, North Carolina caused by the 2009 Blizzard

The annual average precipitation at Old Fort is 54.01 Inches. Rainfall is fairly evenly distributed throughout the year. The wettest month of the year is March with an average rainfall of 5.59 Inches.

According to the United States Census Bureau, the town has a total area of 1.2 square miles (3.1 km2), all of it land.

There were 441 households out of which 25.9% had children under the age of 18 living with them, 37.9% were married couples living together, 14.5% had a female householder with no husband present, and 39.0% were non-families. 35.8% of all households were made up of individuals and 16.1% had someone living alone who was 65 years of age or older. The average household size was 2.18 and the average family size was 2.76.

All content from Kiddle encyclopedia articles (including the article images and facts) can be freely used under Attribution-ShareAlike license, unless stated otherwise. Cite this article:
Old Fort, North Carolina Facts for Kids. Kiddle Encyclopedia.