Marion is a city in McDowell County, North Carolina, United States. It is the county seat of McDowell County. Founded in 1844, the city was named in honor of Brigadier General Francis Marion, the American Revolutionary War Hero whose talent in guerrilla warfare earned him the name "Swamp Fox". Marion's Main Street Historic District is listed on the National Register of Historic Places. The population was 7,838 at the 2010 Census.

According to the United States Census Bureau, the city has a total area of 5.6 square miles (15 km2).

With an elevation of 1,400 feet, Marion's climate is fairly warm during summer, when temperatures tend to be in the 80s and 90s, and moderately cold during the winter, with temperatures typically in the 30s and 40s.

The annual average precipitation at Marion is 54 inches. Rainfall in fairly evenly distributed throughout the year, with the wettest month of the year being March with an average rainfall of 5.59 Inches. 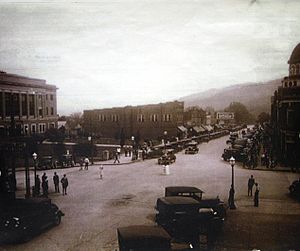 Bustling Downtown Marion in the 1920s 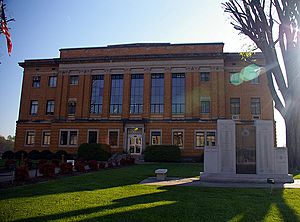 Looking down Main Street in Marion 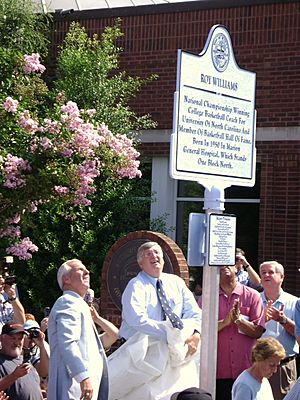 UNC Coach Roy Williams at his Historical Marker dedication in 2011

Marion, the county seat of McDowell County, was planned and built on land selected by the first McDowell County Commissioners on March 14, 1844 at the Historic Carson House on Buck Creek. It was not until 1845, however, that the official name of Marion was sanctioned as the county seat by the state legislature. The name of Marion came from Brigadier General Francis Marion, the American Revolutionary War hero, known as the “Swamp Fox” and the man upon whom the movie "The Patriot" was based. Over the years, Marion was also home to Sgt. Daniel Kanipe, one of only two survivors of General Custer's 7th Cavalry that was massacred at the Battle of Little Bighorn. An historical marker was placed in front of his former home in 2011. The nearby Lake James is a popular local and tourist attraction, and has been the backdrop for movies such as The Last of the Mohicans and The Hunt for Red October.

Until the late 19th century, Main Street was a collection of mostly wooden huts, houses, and buildings. On Sunday morning, November 25, 1894 a fire sprang up in an old building known as the “Ark” located behind the Courthouse. The fire spread to Main Street and rushed down the street at an incredible pace. The wooden buildings were quickly consumed by the enormous inferno. The few brick buildings on Main Street were also gutted, and because there was no public water supply, bucket brigades were hurriedly formed to halt the advance of the fire. It was not enough, however, and most of Main Street was burned to the ground. Showing the resiliency possessed by the citizens, the city came together and took on the rebuilding process, making Marion larger and stronger than before. Today, downtown Marion is listed in the National Register of Historic Places.

On Oct. 2, 1929, the McDowell County sheriff and several deputies faced a group of workers outside the fence in front of the Marion Manufacturing Company, whose 600 employees had been on strike for four months. A gunfight quickly ensued between the two groups. Sheriff Oscar Adkins would later swear in court that the strikers opened fire first, although no weapons were ever found on any of the strikers. 36 strikers were shot, 6 mortally, during the confrontation. Sinclair Lewis wrote a syndicated newspaper report entitled "Cheap and Contented Labor: The Picture of the Southern Mill Town." He concluded: "The workers, especially in Marion, have become discouraged. They are hungry, tired, bewildered. They are sick of being shot down. Unless the whole country encourages them [financially], they will crawl back into the slavery I have sought to picture here." However, since the Great Depression was in full force, little such help would arrive.

Eleven structures make up the Main Street Historic District in the downtown area, which was listed on the National Register of Historic Places in 1991. Four churches, St. John's Episcopal Church (1882), First Baptist (1914), First Presbyterian (1923), and St. Matthew's Lutheran Church (1935); two former hotels, the Eagle Hotel, which survived the 1894 fire, and the Hotel Marianna (1910); a bank on Main Street built in 1903; the McDowell County Courthouse, which was constructed in 1928; the Marion Depot (1867), which is the oldest surviving depot on the Western Rail Line; the Public Library (1937), which was originally built as a post office; and the Marion Community Building, built in 1937. Projects are currently underway to revitalize the downtown area as well as to maintain and restore the character of the long-standing buildings. Also listed on the National Register of Historic Places are the Depot Historic District, Carson House, Carson–Young House, and Lone Beech.

Marion currently stands as a small congenial town at the edge of the Blue Ridge Mountains, "Where Main Street Meets the Mountains." Just off Interstate 40, Marion is located approximately 35 miles east of Asheville and 20 miles west of Morganton.

Marion serves as a gateway from Interstate 40 to many nearby attractions and recreation activities in the Blue Ridge Mountains. A contemporary rest area located on the US 221 bypass west of Marion serves as a welcome center for visitors to the area. The rest area and visitor center is staffed with travel counselors during daylight hours. In addition to providing visitor information, it also has picnic facilities and vending machines on the premises.

The Marion Marauders, a Tar Heel League baseball club, were a favorite local attraction in the 1940s and 1950s, and was the home team of star pitcher Kelly Jack Swift, who in 1953 became the last minor league pitcher to ever win 30 games in a season, going 30-7 with a 2.54 ERA. Sports Illustrated published an article about Swift and his accomplishment in its October 17, 2011 edition.

2007 Basketball Hall of Fame inductee and current University of North Carolina Tar Heels basketball coach Roy Williams was born and spent a part of his childhood in Marion. On July 18, 2011, the town held a ceremony to dedicate a Carolina blue historical marker downtown in front of City Hall, listing Marion as the birthplace of Coach Williams, as well as his many awards and accomplishments.

Marion continues to be a community that values athletics, especially the "Fightin' Titans" of McDowell High, whose girls' basketball team won the 1992 North Carolina 4A State Championship. 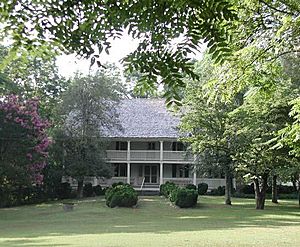 There are three parks in Marion operated by the city, the main one being downtown beside the Community Building. In 2010, the City opened the Joseph McDowell Historical Catawba Greenway. Named in honor of the county's namesake, Colonel Joseph McDowell, the greenway follows the flow of the Catawba River. Benches, picnic tables, fitness stations, fishing piers, and a canoe launch are scattered throughout the three mile trail. Access points are located at Highway 70 between Highway 221/226 By-Pass and Roby Conley Road as well as a parking lot at the opposite end behind the Joseph McDowell House. Historic homes such as the Carson House and the Joseph McDowell House have kept the history of Marion alive for decades, and are open weekdays to the public (the latter currently receiving restoration). In downtown Marion, the beautifully restored Marion Depot, the oldest surviving depot on the Western Rail Line, hosts numerous community events each month, and is available for rental to individuals and groups for meetings, receptions, parties, and other functions. Lake James provides fishing, camping, and recreation for McDowell and Burke Counties and is just minutes from Marion. Lake Tahoma, Linville Caverns, Linville Falls, and the Blue Ridge Parkway are also very close to town, and exhibit the diverse scenery of Western North Carolina. There are also several golf courses outside of town, as well as two waterparks and numerous campgrounds.

All content from Kiddle encyclopedia articles (including the article images and facts) can be freely used under Attribution-ShareAlike license, unless stated otherwise. Cite this article:
Marion, North Carolina Facts for Kids. Kiddle Encyclopedia.