Linville Falls is a waterfall located in the Blue Ridge Mountains of North Carolina in the United States. The falls move in several distinct steps, beginning in a twin set of upper falls, moving down a small gorge, and culminating in a high-volume 45-foot (14 m) drop. It is named for the Linville River, which goes over the falls. Linville Falls has the highest volume of any waterfall on the Northern Edge of the Blue Ridge Mountains.

Linville Falls marks the beginning of the Linville Gorge, which is formed by the Linville River, which continues on after the falls before finally ending near Lake James.

According to personnel at Linville Falls, the falls were used by local Native Americans to execute prisoners. No one is known to have survived a fall over the final plunge, except for kayaker Pat Keller in 2010. The following is from the CARNEGIE Hero Fund Commission "Charles W. Davis, 23, beekeeper, saved Hallie L. Hartman, 20, from drowning, Linville Falls, North Carolina, August 30, 1928. Miss Hartman fell into the Linville River and was carried 300 feet through swift water and dropped 30 feet over a fall into a pool in which the water was 45 feet deep and very cold. The banks of the pool were high and precipitous. Davis descended high rock ledges with difficulty to a low ledge at the pool, becoming winded. Fully clothed, he swam 40 feet through rough water to Miss Hartman, who was unconscious. Grasping her, he swam 15 feet with great exertion against a strong undercurrent that pulled toward the falls and then swam 65 feet farther to a low point at the bank. As he tried to push Miss Hartman upon the bank, he fell to his knees from fatigue but got to his feet quickly and placed Miss Hartman upon the bank. After prolonged efforts, Miss Hartman was revived."

The falls were donated to the National Park Service in 1952 by John D. Rockefeller, Jr. He provided about $100,000 for purchase of the land, including a 1,100-acre (4.5 km2) area surrounding the falls and a part of Linville Gorge, from Giulia Luginbuhl of Des Moines, IA, whose father, F. W. Hossfeld of Morganton, NC, had purchased the property about 1900. 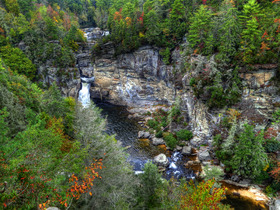 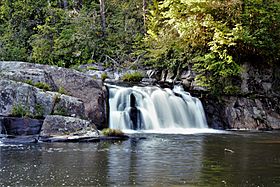 The falls is owned by the National Park Service, which operates a visitor center and several miles of non-handicapped accessible trails with 4 overlooks for the falls. The 0.5-mile (0.80 km) Upper Falls trail leads to the top of the falls, where visitors can see the small twin upper falls and the water spiraling through a small canyon on its way to the main falls. The Erwin's View trail leads to 2 overlooks, the Chimney View overlook (0.7 miles) and the Erwin's View overlook (0.8 miles). The 0.5-mile (0.80 km) Plunge Basin Trail leads to the Plunge Basin Overlook, which provides a view of the falls from the other side of the river. Finally, the 0.7-mile (1.1 km) Gorge Trail, which branches off from the Plunge Basin trail, leads to an area near the foot of the falls. Swimming is prohibited at all areas of Linville Falls, as many deaths have occurred. 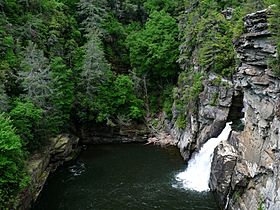 Panoramic view of Linville Falls and the Linville River, as seen from the Chimney Rock overlook. 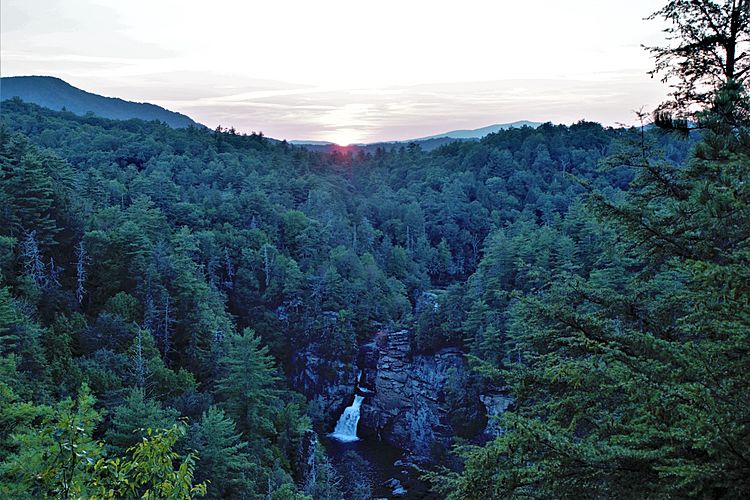 Evening Sunset view of Linville Falls, as seen from the Chimney Rock overlook.

All content from Kiddle encyclopedia articles (including the article images and facts) can be freely used under Attribution-ShareAlike license, unless stated otherwise. Cite this article:
Linville Falls Facts for Kids. Kiddle Encyclopedia.