Spruce Pine is a town in Mitchell County, North Carolina, United States. The population was 2,175 at the 2010 census.

Spruce Pine was founded in 1907 when the Clinchfield Railroad made its way up the North Toe River from Erwin, Tennessee. The town was originally centered around a tavern operated by Isaac English, located on an old roadway that ran from Cranberry, North Carolina down to Marion, NC. The Old English Inn still stands at its original location near the center of town.

The railroad, combined with a rapidly expanding mining industry (the town is the namesake of the famous Spruce Pine Mining District) made Spruce Pine the largest town in the Toe River Valley, as it became the hub of commerce and culture for the area. Spruce Pine was the home of The Feldspar Company and Spruce Pine Mica, and other major mining interests had operations in and around the town.

With the decline in use of railroads to ship goods, along with increasing automation in the mining industry, the town has recently seen its fortunes dwindle and has undertaken a major effort to reinvent itself. Tourism has become a major economic force in the region, and the town's proximity to the Blue Ridge Parkway, combined with its location near the edge of the Blue Ridge Escarpment has helped make Spruce Pine a travel destination for many. The town also boasts the moniker of "The Mineral City of the World"

On August 4, 2007, the downtown area of Spruce Pine was threatened when an arsonist set fire to several buildings downtown. The fires, which brought firemen from 4 counties around Spruce Pine, severely damaged the building housing Cheapskates Music on Lower Street, and caused some tense moments when it seemed that the fires might spread out of control and consume the downtown area. Federal arson officials are still investigating the fires, and an arrest has been made in connection with the incident.

The Downtown Spruce Pine Historic District and Gunter Building are listed on the National Register of Historic Places.

Abandoned Bon Ami mine is open for tours

According to the United States Census Bureau, the town has a total area of 3.9 square miles (10.1 km2), all of it land. The town limits are approximately 3 miles from the Blue Ridge Parkway and located 50 miles northeast of Asheville, NC and 40 miles southwest of Boone, NC.

There were 888 households, out of which 27.3% had children under the age of 18 living with them, 48.8% were married couples living together, 12.5% had a female householder with no husband present, and 35.2% were non-families. 32.1% of all households were made up of individuals, and 16.8% had someone living alone who was 65 years of age or older. The average household size was 2.29 and the average family size was 2.89.

Recently East Carolina University Dental School announced a facility will open 2014 on the Blue Ridge Regional Hospital campus to serve Western North Carolina residents in the Mayland area (Mitchell, Avery and Yancey Counties). This facility is one of 5 facilities proposed throughout the state of North Carolina.

Beginning in 2014 The North Carolina Department of Transportation, will begin widening US 19E, which is the major corridor linking the towns of Spruce Pine and Burnsville to Interstate 26. The new highway will transform from a two-lane highway to a divided four-lane featuring grassy medians and turn lanes. 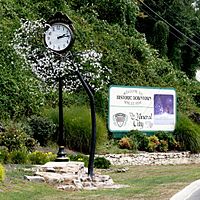 Spruce Pine is home to The Mitchell News-Journal, a weekly newspaper printed by Community Newspapers, Inc. and WTOE radio, at 1470 kHz on the AM dial and 101.1 FM. The radio station operates 24 hours a day and is an ABC Radio affiliate. It is owned by Mountain Valley Media, based in Burnsville, NC.

Mayland Community College also calls Spruce Pine home. Founded by an act of the North Carolina General Assembly in 1971, Mayland hosts some 35 curriculum programs and provides vocational and technical training, along with college transfer opportunities to residents of the region.

All content from Kiddle encyclopedia articles (including the article images and facts) can be freely used under Attribution-ShareAlike license, unless stated otherwise. Cite this article:
Spruce Pine, North Carolina Facts for Kids. Kiddle Encyclopedia.