Unicoi County is a county located in the U.S. state of Tennessee. As of the 2010 census, the population was 18,313. Its county seat is Erwin. Unicoi is a Cherokee word meaning "white," "hazy," "fog-like," or "fog draped."

Unicoi County was created in 1875 from portions of Washington and Carter counties, though the first settlers had arrived more than century earlier. The county remained predominantly agrarian until the arrival of railroads in the area in the 1880s.

During the 1910s, the Clinchfield Railroad established a pottery in Erwin, which eventually incorporated under the name, "Southern Potteries." This company produced a popular brand of dishware, commonly called Blue Ridge China, which featured hand-painted underglaze designs. While the company folded in the 1950s, Blue Ridge dishes remain popular with antique collectors.

The Appalachian Trail approaching the summit of Big Bald

Unicoi County is situated entirely within the Blue Ridge Mountains, specifically the Bald Mountains (south of the Nolichucky) and the Unaka Range (north of the Nolichucky). Big Bald, which at 5,516 feet (1,681 m) is the highest mountain in the Balds, is also Unicoi County's high point. Traversed by the Appalachian Trail, the mountain is topped by a grassy bald, allowing a 360-degree view of the surrounding mountains. 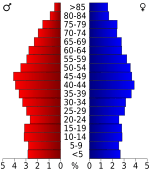 All content from Kiddle encyclopedia articles (including the article images and facts) can be freely used under Attribution-ShareAlike license, unless stated otherwise. Cite this article:
Unicoi County, Tennessee Facts for Kids. Kiddle Encyclopedia.