Unicoi was originally known as "Greasy Cove." In 1851, the Swingle brothers opened a post office in the community, and named it "Swingleville." In 1876, Dr. F.H. Hannum obtained control of the post office, and changed its name to "Limonite." When the railroads arrived in the valley in the late 1880s, the name was changed to "Unicoi City," and later shortened to its current form. The town developed in the early 20th century as a shipping point for area mining and logging operations. 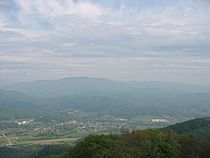 Unicoi is surrounded by the Cherokee National Forest. Buffalo Mountain rises prominently to the west of Unicoi, and a series of rugged hills and ridges that comprise the outer Unaka Mountains rise to the east. Erwin, the county seat, is located further down the valley to the southwest. Johnson City is located opposite Buffalo Mountain to the north.

According to the United States Census Bureau, the town has a total area of 16.3 square miles (42 km2), all of it land.

There were 1,452 households out of which 29.2% had children under the age of 18 living with them, 62.1% were married couples living together, 7.1% had a female householder with no husband present, and 27.5% were non-families. 23.2% of all households were made up of individuals and 8.8% had someone living alone who was 65 years of age or older. The average household size was 2.42 and the average family size was 2.88.

All content from Kiddle encyclopedia articles (including the article images and facts) can be freely used under Attribution-ShareAlike license, unless stated otherwise. Cite this article:
Unicoi, Tennessee Facts for Kids. Kiddle Encyclopedia.