Alexander County is a county established in the U.S. state of North Carolina in 1847. As of the 2010 census, the population was 37,198. Its county seat is Taylorsville. Alexander County is part of the Hickory–Lenoir–Morganton, NC Metropolitan Statistical Area.

Alexander County was chartered in 1847 by the North Carolina General Assembly. It was formed from portions of what were then Iredell, Caldwell, Wilkes counties. The county was named for William Julius Alexander who was a Speaker of the North Carolina House of Commons. This Piedmont area was settled primarily by farmers, many of Scots-Irish descent.

Alexander County was established in 1847, the year of the first sale of land in the county seat (Taylorsville). With the proceeds from the sale, the county built the first courthouse on the present site. When the Civil War began, Alexander County was 14 years old. The 1860 population was 5,837; yet Alexander County ranked high per capita in the number of Confederate soldiers it sent to the war. Taylorsville is the namesake of either John Louis Taylor, Carolina agriculturist and political philosopher, or General Zachary Taylor, the 12th president of the United States.

Alexander County is located within the Piedmont region of western North Carolina. The county's main geographic feature is the Brushy Mountains, a deeply eroded spur of the Blue Ridge Mountains to the west. The "Brushies," as they are called locally, rise from 300 to 1,000 feet (300 m) above the surrounding countryside, and dominate the county's northern horizon. The highest point in Alexander County is Hickory Knob in the Brushies; it has an elevation of 2,560 feet (780 m) above sea level. Barrett Mountain, an isolated mountain ridge, is in the western part of the county. The remainder of Alexander County's terrain consists of gently rolling countryside. The county's largest river, the Catawba, forms its southern border.

Within Alexander County is the unincorporated town of Hiddenite, the location of a mine that yields emeralds, sapphires, and its namesake stone "hiddenite," a variety of spodumene.

The county is served by US Highway 64, a controlled-access roadway connecting Taylorsville with Lenoir and Statesville. NC Highways 90, 16, and 127 also serve the county. Interstate 40 and 77 are 30 minutes from the majority of county residents. The Charlotte Douglas International Airport is an hour's drive from most parts of the county. The area is also served by the Hickory Regional Airport (30 minutes) and the Statesville Airport (20 minutes). The Alexander Railroad Company is an active short-line rail system operating between Taylorsville and Statesville, and connecting with Norfolk Southern.

The county is served by one railroad, the Alexander Railroad Company. 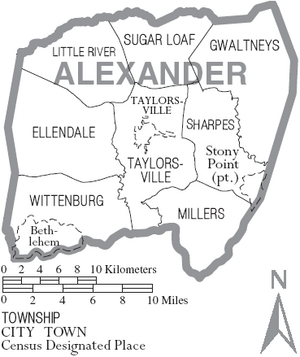 The population ranking of the following table is based on the 2010 census of Alexander County.

All content from Kiddle encyclopedia articles (including the article images and facts) can be freely used under Attribution-ShareAlike license, unless stated otherwise. Cite this article:
Alexander County, North Carolina Facts for Kids. Kiddle Encyclopedia.