Kids Encyclopedia Facts
Not to be confused with Stateville Correctional Center.

Statesville is a small city located in Iredell County, North Carolina, United States and was named an All-America City in 1997 and 2009. The population was 24,633 at the 2010 census. It is the county seat of Iredell County and is located at the intersection of I-40 and I-77. 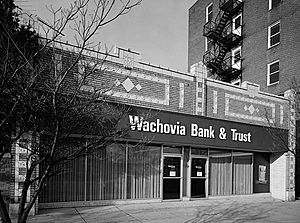 In 1753, Scots-Irish Presbyterians and German Lutherans, who originally settled in Pennsylvania, began arriving in Statesville to plant crops in the fertile soil where game and water were also plentiful. The settlement, known as Fourth Creek Congregation, was named for the fresh water stream, which was the fourth creek west of the neighboring settlement of Salisbury. The center of the settlement was a log cabin where the Presbyterians worshiped and where the First Presbyterian Church is located today.

In 1755, the colonial governor Arthur Dobbs authorized the construction of the colony’s frontier fort, which was located approximately three miles due north of the Fourth Creek settlement. Built and garrisoned by North Carolina provincial soldiers, Fort Dobbs defended the British North America’s western frontier in the colony of North Carolina during the French and Indian War and Anglo-Cherokee War. Fort Dobbs combined the functions of a military barracks, fortification, refuge for settlers, provisioning depot and center for negotiations with Native Americans.

The state legislature divided Rowan County in 1788, and the new county was named Iredell for James Iredell, associate justice of the first Supreme Court during the presidency of George Washington.

One year later, the legislature selected a spot for the county seat. The Fourth Creek Congregation was chosen, and the settlement became known as Statesville.

As early as 1833, Statesville's leaders began laying track for railroads to connect the Piedmont area of North Carolina with the rest of the country.

By 1858, Statesville was growing rapidly and soon afterward began leading the state in the production of tobacco and tobacco products, the manufacture and blending of whiskey, and became a large distribution center for roots and herbs.

All content from Kiddle encyclopedia articles (including the article images and facts) can be freely used under Attribution-ShareAlike license, unless stated otherwise. Cite this article:
Statesville, North Carolina Facts for Kids. Kiddle Encyclopedia.