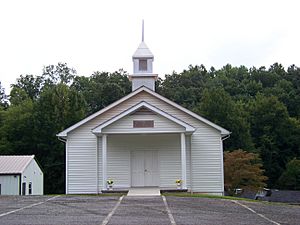 Thurmond is an unincorporated community in north eastern Wilkes County, North Carolina along the border with Surry County. The community lies between US Highway 21 and the Mitchell River. It is located in the foothills of the Blue Ridge Mountains. Thurmond has an elevation of 1,402 feet above sea level.

All content from Kiddle encyclopedia articles (including the article images and facts) can be freely used under Attribution-ShareAlike license, unless stated otherwise. Cite this article:
Thurmond, North Carolina Facts for Kids. Kiddle Encyclopedia.