Alleghany County is a county located in the U.S. state of North Carolina. As of the 2010 census, the population was 11,155. Its county seat is Sparta.

The county was formed in 1859 from the eastern part of Ashe County, North Carolina. It was named for the Allegheny Mountains. Numerous boundary adjustments have been made since it was established, but none have resulted in new counties.

Alleghany County is located in northwestern North Carolina, and its northern border is with the State of Virginia. The county is located entirely within the Appalachian Mountains region of western North Carolina. Most of the county is located atop a rolling plateau that ranges from 2,500 feet (760 m) to 3,000 feet (910 m) above sea level. The southern border of the county drops abruptly nearly 1,500 feet (460 m) to the Foothills region of North Carolina. The plateau is crossed by numerous hills and mountains. The highest point in the county is Peach Bottom Mountain - Catherine Knob at 4,175 feet (1,273 m) above sea level. The major rivers of Alleghany County are the New River, and the Little River; the latter flows through the town of Sparta, the county seat.

Due to its elevation, Alleghany County enjoys slightly cooler summers than the lowland areas to the east and south, with temperatures seldom rising over 90 °F (32 °C). In the winter, however, temperatures can frequently be colder than would be expected in a southern state. Daytime highs can fall into the teens or lower, and snowfall can be extremely heavy at times. According to USClimateData.com, the average temperature is 52.85 °F (11.58 °C). 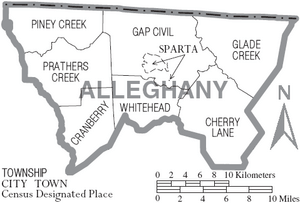 The population ranking of the following table is based on the 2010 census of Alleghany County.

All content from Kiddle encyclopedia articles (including the article images and facts) can be freely used under Attribution-ShareAlike license, unless stated otherwise. Cite this article:
Alleghany County, North Carolina Facts for Kids. Kiddle Encyclopedia.