The Southeastern mixed forests are an ecoregion of the temperate broadleaf and mixed forest biome, in the lower portion of the Eastern United States.

This ecoregion covers the Piedmont region of the eastern United States, stretching in a broad arc from extreme southwest New Jersey southwest to Mississippi. It is distinguished from neighboring ecoregions by elevation and vegetation. At lower elevations to the east are the Middle Atlantic coastal forests on the Atlantic coastal plain. Similarly, the Southeastern conifer forests occupy the Gulf coastal plain to the south. Higher, and to the north and west, are the Appalachian-Blue Ridge forests and the Appalachian mixed mesophytic forests of the Appalachian Mountains. Small stands of these forests extend into north Florida.

This ecoregion lies within the Cfa Köppen climate zones, and the Cf and Do Trewartha climate zones, placing it in the humid subtropical climate category, with hot, humid summers, and mild to cool winters. The coldest month mean temperature at or above freezing, and significant precipitation in all seasons.

Both oaks (Quercus spp.) and hickories (Carya spp.) are abundant in this ecoregion. Additionally, some 3,635 species of native herbaceous and shrub species have been recorded here.

American chestnut (Castanea dentata) was formerly an important tree in this ecoregion, but its population was destroyed by the chestnut blight in the early 20th century. It still persists as an understory tree, but is often killed by the blight before it matures.

The hickories (Carya spp.) of this ecoregion are identifiable by their pinnately compound leaves. They include pignut (Carya glabra) and mockernut hickory (Carya tomentosa), both of which grow on a variety of sites from dry ridges to mesic habitats.

Sugar maple (Acer saccharum), a shade tolerant tree, grows amid the oaks and hickories in the northern part of this ecoregion.

Small stands of these forests extend into North Florida 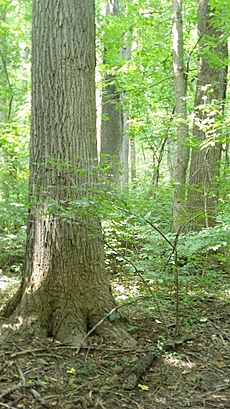 All content from Kiddle encyclopedia articles (including the article images and facts) can be freely used under Attribution-ShareAlike license, unless stated otherwise. Cite this article:
Southeastern mixed forests Facts for Kids. Kiddle Encyclopedia.