Acer nigrum (black maple) is a species of maple closely related to A. saccharum (sugar maple), and treated by some authors as a subspecies of it, as Acer saccharum subsp. nigrum.

Identification can be confusing due to the tendency of the two species to form hybrids. The simplest and most accurate method for distinguishing between the two trees is the generally three-lobed leaves of the black maple versus the generally five-lobed leaves of the sugar maple. The leaves of the black maple also tend to have a "droopy" appearance. Other differences that are not as pronounced include darker, more deeply grooved bark, slightly smaller seeds, and thicker petioles. Hybrids are intermediate in their characteristics. 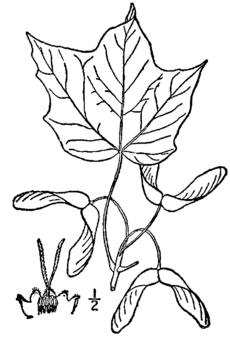 Illustration from 1913's Illustrated flora of the northern states and Canada

This species is used similarly to the A. saccharum, for timber as hard maple, for landscaping, and for maple syrup production.

All content from Kiddle encyclopedia articles (including the article images and facts) can be freely used under Attribution-ShareAlike license, unless stated otherwise. Cite this article:
Acer nigrum Facts for Kids. Kiddle Encyclopedia.