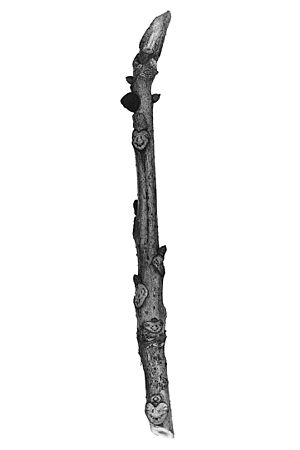 Twig of a bitternut

It is closely related to the pecan, sharing similar leaf shape and being classified in the same section of the genus Carya sect. Apocarya, but unlike the pecan, it does not have edible nuts. It is most readily distinguished from the pecan by the smaller number of leaflets, with many leaves having only 7 leaflets (rarely fewer than 9, and often 11–13, in the pecan). Hybrids with the pecan are known, and named Carya × brownii. A hybrid between the shagbark hickory (C. ovata) is also recognized, and is known as Laney's hickory (Carya ×laneyi).

Bitternut hickory grows in moist mountain valleys along streambanks and in swamps. Although it is usually found on wet bottom lands, it grows on dry sites and also grows well on poor soils low in nutrients. The species is not included as a titled species in the Society of American Foresters forest cover types because it does not grow in sufficient numbers.

Bitternut hickory grows throughout the eastern United States from southwestern New Hampshire, Vermont, Maine, and southern Quebec; west to southern Ontario, central Michigan, and northern Minnesota; south to eastern Texas; and east to northwestern Florida and Georgia. It is most common, however, from southern New England west to Iowa and from southern Michigan south to Kentucky. It is probably the most abundant and most uniformly distributed of all the hickories.

Bitternut hickory is a diploid species with two sets of sixteen chromosomes that readily hybridizes with other diploid hickory species with a few named hican varieties available. The pecan variety 'Major' has bitternut alleles at two simple sequence repeat loci indicating a cryptic cross that may also have involved C. ovata.

All content from Kiddle encyclopedia articles (including the article images and facts) can be freely used under Attribution-ShareAlike license, unless stated otherwise. Cite this article:
Bitternut hickory Facts for Kids. Kiddle Encyclopedia.