Kids Encyclopedia Facts
Not to be confused with Quercus robur.

Quercus rubra, the northern red oak, is an oak tree in the red oak group (Quercus section Lobatae). It is a native of North America, in the eastern and central United States and southeast and south-central Canada. It grows from the north end of the Great Lakes, east to Nova Scotia, south as far as Georgia, Mississippi, Alabama, and Louisiana, and west to Oklahoma, Kansas, Nebraska, and Minnesota. It has been introduced to small areas in Western Europe, where it can frequently be seen cultivated in gardens and parks. It prefers good soil that is slightly acidic. Often simply called red oak, northern red oak is so named to distinguish it from southern red oak (Q. falcata), also known as the Spanish oak. It is sometimes called champion oak. It is also the state tree of New Jersey and the provincial tree of Prince Edward Island.

In many forests, this deciduous tree grows straight and tall, to 28 m (92 ft), exceptionally to 43 m (141 ft) tall, with a trunk of up to 50–100 cm (20–39 in) diameter. Open-grown trees do not get as tall, but can develop a stouter trunk, up to 2 m (6 ft 7 in) in diameter. It has stout branches growing at right angles to the stem, forming a narrow round-topped head. It grows rapidly and is tolerant of many soils and varied situations, although it prefers the glacial drift and well-drained borders of streams. In the southeastern United States, it is frequently a part of the canopy in an oak-heath forest, but generally not as important as some other oaks.

Northern red oak is easy to recognize by its bark, which features ridges that appear to have shiny stripes down the center. A few other oaks have bark with this kind of appearance in the upper tree, but the northern red oak is the only tree with the striping all the way down the trunk.

Northern red oak is the most common species of oak in the northeastern US after the closely related pin oak (Q. palustris). The red oak group as a whole are more abundant today than they were when European settlement of North America began as forest clearing and exploitation for lumber much reduced the population of the formerly dominant white oaks.

As with most other deciduous oaks, leafout takes place in spring when day length has reached 13 hours—it is tied entirely to photoperiod and will take place regardless of air temperature. As a consequence (see below), in cooler regions, northern red oaks often lose their flowers to late spring frosts, resulting in no seed crop for the year. The catkins and leaves emerge at the same time. The acorns develop on the tree for two growing seasons and are released from the tree in early October, and leaf drop begins when day length falls under 11 hours. The timing of leafout and leaf drop can vary by as much as three weeks in the northern and southern US. Seedlings emerge in spring when soil temperatures reach 21 °C (70 °F).

Red oak acorns, unlike the white oak group, display epigeal dormancy and will not germinate without a minimum of three months' exposure to temperatures below 40 °F (4 °C). They also take two years of growing on the tree before development is completed. 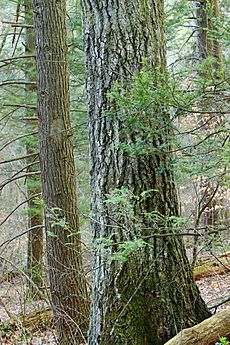 Over the last few decades, the northern red oak has dealt with several environmental factors, mainly disease, predation by insects, and limited opportunities for dispersal. These stresses have impacted the species' ability to proliferate in both the Northeast and Europe. The various environmental responses observed in Quercus rubra across several temperate environmental conditions have allowed for it to serve as a model organism for studying symbiotic relationships, dispersal, and habituation between tree species.

Canker pathogen, Diplodia corticola, has become a major pathogen to the species over the last decade, causing leaf browning, bark cracking and bleeding, and high rates of tree mortality across the northeastern United States. The northern red oak is also characterized as one of the most susceptible species to plant fungi Phytophthora cinnamomi and Phytophthora ramorum, which have caused severe, red-black cankers in the trunk region of the species. Both P. cinnamomi and P. ramorum grow under warmer temperature conditions; as a result, northern red oak trees found in California, France, and northern Spain all have higher incidences of fungal infection. Oak Wilt caused by the fungus Ceratocystis fagacearum is a major pathogen found in eastern North Americana that can kill trees quickly.

In Europe, northern red oak acorns have become food of several moth species, particularly Cydia fagiglandana and Cydia splendana, which increases their niche breadths and reduces their competition with Curculio weevils. Due to this, germination rates among the northern red oak acorns have decreased significantly and resulted in less seed dispersal by animals within Poland. In addition, limited opportunities for dispersal have become costly for the northern red oak in Europe. European animals known for dispersing tendencies, such as the European jay and wood mouse, have been found to be more attracted to local oak species. Northern red oak kernels have highly concentrated amounts of tannin, a biochemical known as a predator deterrent and produce a bitter taste, which has limited appeal for consumption among animal species.

Quercus rubra has effective ectomycorrhizal relationships that have been correlated with increased growth rates. Northern red oak trees have been shown to increase growth in the presence of various ascomycetes that coil at the base of the oak trunk. The fungi, which eventually proliferate at the stumps of deciduous trees, have been found to be host-specific to both Quercus rubra and Quercus montana and primarily promote growth upon infection.

It was introduced to Europe in the 1700s and has naturalized throughout most of western and central Europe. Across western and central Europe, the northern red oak has become the fourth-most significant invasive species, colonizing several regions across Belgium, Germany, Northern Italy, Lithuania, Poland, Ukraine, European Russia, the Urals and Western Siberia). The northern red oak is primarily found on the edges of woodland reserves in Europe, where light availability, tannin concentration, and animal dispersal are the most necessary component for the species' longevity and survival. The high influx of the species in Europe is primarily based on its economic productivity as a fast-growing source of timber; however, it has been linked to lower percentages of trace elements and minerals found in the surrounding soil and reduced richness among native oak species such as Quercus robur. 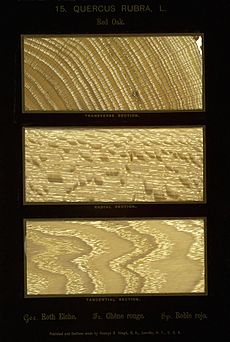 The northern red oak is one of the most important oaks for timber production in North America. Quality red oak is of high value as lumber and veneer, while defective logs are used as firewood. Other related oaks are also cut and marketed as red oak, although their wood is not always of as high a quality. These include eastern black oak, scarlet oak, pin oak, Shumard oak, southern red oak and other species in the red oak group. Construction uses include flooring, veneer, interior trim, and furniture. It is also used for lumber, railroad ties, and fence posts.

Red oak wood grain is so open that smoke can be blown through it from end-grain to end-grain on a flat-sawn board. For this reason, it is subject to moisture infiltration and is unsuitable for outdoor uses such as boatbuilding or exterior trim.

The acorns can be collected in autumn, shelled, tied up in a cloth, and leached to remove bitterness. They can then be eaten whole or ground into meal.

Quercus rubra is grown in parks and large gardens as a specimen tree. It is not planted as often as the closely related pin oak as it develops a taproot and quickly becomes difficult to transplant, however modern growing pots have made starting seedlings with taproots easier than in the past.

Northern red oak seedlings have been known to have a high mortality rate in northeast regions prone to spring freeze, particularly in Massachusetts. Acorns produced by oaks in this region are typically smaller in size as an adaptation to frost produced in high latitudes; however, the resulting smaller seedlings have produced limited opportunities for animal consumption and dispersal. Flooding along the continental United States has been shown to be a major issue for the northern red oak, in which decreased phloem transport and photosynthetic activity has been observed, but only after multiple days of flooding, indicating that the northern red oak has adapted moderate resistance to excess water exposure. The northern red oak has also developed tolerance mechanisms for heat stress, particularly observed in deciduous forests in the Southeastern United States, where, during summer heat waves, temperatures can exceed 40 °C (104 °F). The leaves of the northern red oak have been observed to have an acclimation to Rubisco activase activity that is directly correlated to acclimations with repeated exposure to heat waves. Consistent photosynthetic activity in the red oak has also been observed in the presence of high carbon dioxide levels that often occur as a result of elevated temperatures. 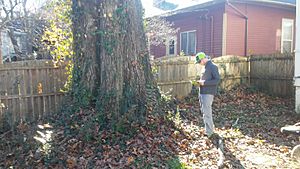 All content from Kiddle encyclopedia articles (including the article images and facts) can be freely used under Attribution-ShareAlike license, unless stated otherwise. Cite this article:
Northern red oak Facts for Kids. Kiddle Encyclopedia.