Quercus montana, the chestnut oak, is a species of oak in the white oak group, Quercus sect. Quercus. It is native to the eastern United States, where it is one of the most important ridgetop trees from southern Maine southwest to central Mississippi, with an outlying northwestern population in southern Michigan. It is also sometimes called rock oak because of its presence in montane and other rocky habitats. As a consequence of its dry habitat and ridgetop exposure, it is not usually a large tree, typically 18–22 m (59–72 ft) tall; occasional specimens growing in better conditions can however become large, with trees up to 40–43 m (131–141 ft) tall known. They tend to have a similar spread of 18–22 m (59–72 ft). A 10-year-old sapling grown in full sun will stand about 5 m (16 ft) tall. This species is often an important canopy species in an oak-heath forest.

The Latin specific epithet montana refers to mountains or coming from mountains which probably refers to the tree's habitat and its ability to grow on rocks . 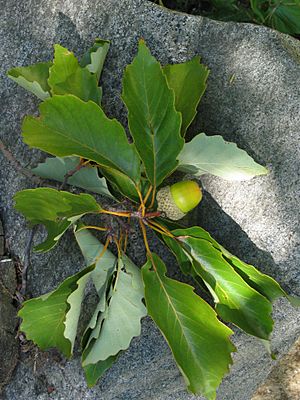 Leaf cluster of a chestnut oak 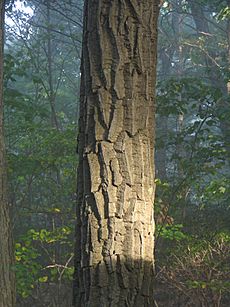 The distinctive bark of the chestnut oak

Characteristics of the chestnut oak include: 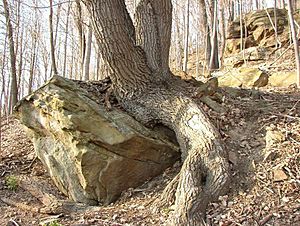 This species is a predominant ridge-top tree in eastern North American hardwood forests. Young chestnut oaks are easily capable of reproducing from stump sprouts if cut. A significant amount of chestnut oaks in the Appalachians are trees that regrew from stump sprouts after being logged. It is a long-lived tree, with high-quality timber when well-formed. The acorns of the chestnut oak are a valuable wildlife food.

Chestnut oak trees are generally not the best timber trees because they are usually branched low and not very straight, but when they grow in better conditions, they are valuable for timber, which is marketed as 'mixed white oak'. The bark of chestnut oak has a high tannin content and prior to the 20th century was heavily used in the leather tanning industry, but the wood was usually discarded since it was considered inferior to that of Q. alba. By the late 19th century, as the population of mature white oaks in the eastern US was dwindling, loggers began exploiting chestnut oak wood more heavily. It serves many of the same applications as white oak wood and as it is fairly rot-proof, has also been used for fencing, railroad ties, and other uses where the wood comes into contact with soil. Due to a relatively high density (47 pounds per square foot), chestnut oak makes excellent firewood.

The acorns can be eaten by humans but, if bitter, may need to have the tannins leached.

All content from Kiddle encyclopedia articles (including the article images and facts) can be freely used under Attribution-ShareAlike license, unless stated otherwise. Cite this article:
Chestnut oak Facts for Kids. Kiddle Encyclopedia.