Carpinus caroliniana, the American hornbeam, is a small hardwood tree in the genus Carpinus. American hornbeam is also known as blue-beech, and musclewood. It is native to eastern North America, from Minnesota and southern Ontario east to Maine, and south to eastern Texas and northern Florida. It also grows in Canada (southwest Quebec and southeast Ontario). 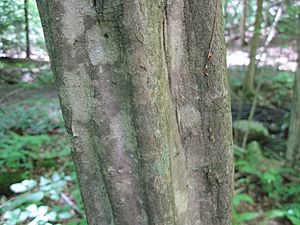 American hornbeam is a small tree reaching heights of 10–15 meters (35–50 ft), rarely 20 meters (65 ft), and often has a fluted and crooked trunk. The bark is smooth and greenish-grey, becoming shallowly fissured in all old trees. The leaves are alternate, 3–12 centimeters (1 1⁄4–4 3⁄4 in) long, with prominent veins giving a distinctive corrugated texture, and a serrated margin. The male and female catkins appear in spring at the same time as the leaves. The fruit is a small 7–8-millimeter (9⁄32–5⁄16-inch) long nut, partially surrounded by a three- to seven-pointed leafy involucre 2–3 centimeters (3⁄4–1 1⁄4 in) long; it matures in autumn. The seeds often do not germinate till the spring of the second year after maturating.

There are two subspecies, which intergrade extensively where they meet: 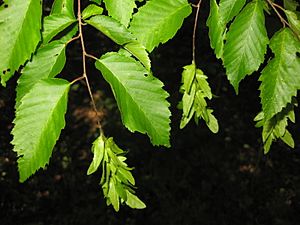 They are shade-loving trees, prefering moderate soil fertility and moisture. It has a shallow, wide-spreading root system. The leaves are eaten by the caterpillars of some Lepidoptera, for example the Io moth (Automeris io).

Common along the borders of streams and swamps, loves a deep moist soil. Varies from shrub to small tree, and ranges throughout the United States east of the Rocky Mountains.

Deer browse the foliage and twigs, while game birds eat the nutlets.

The wood is heavy and hard, and is used for tool handles, longbows, walking sticks, walking canes and golf clubs.

All content from Kiddle encyclopedia articles (including the article images and facts) can be freely used under Attribution-ShareAlike license, unless stated otherwise. Cite this article:
Carpinus caroliniana Facts for Kids. Kiddle Encyclopedia.